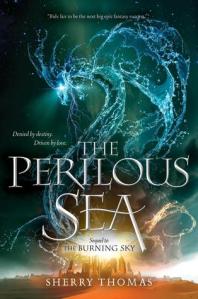 The Perilous Sea
by Sherry Thomas
Series: The Elementary Trilogy #2
Genre: Young Adult Fantasy
Published by Balzer + Bray
Library book
416 pages
Grade: A-
Synopsis: After spending the summer away from each other, Titus and Iolanthe (still disguised as Archer Fairfax) are eager to return to Eton College to resume their training to fight the Bane. Although no longer bound to Titus by a blood oath, Iolanthe is more committed than ever to fulfilling her destiny—especially with the agents of Atlantis quickly closing in.

Soon after arriving at school, though, Titus makes a shocking discovery, one that makes him question everything he previously believed about their mission. Faced with this devastating realization, Iolanthe is forced to come to terms with her new role, while Titus must choose between following his mother’s prophecies—and forging a divergent path to an unknowable future.

“Is there anything else I can do for you?”

He looked back at her. “Are you sure?”

She returned to her room and leaned for a minute against the door.

So this was what it had come to, this stilted courtesy, like that of a divorced couple who must still deal with each other.

With she being the one who hadn’t found anyone else, of course. 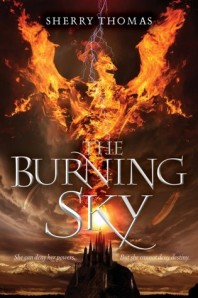 The Burning Sky
by Sherry Thomas
Series: The Elemental Trilogy #1
Genre: Young Adult Fantasy
Published by Balzer & Bray, 2013
e-book, purchased
464 pages
Grade: B+
Synopsis: Iolanthe Seabourne is the greatest elemental mage of her generation—or so she’s being told. The one prophesied for years to be the savior of The Realm. It is her duty and destiny to face and defeat the Bane, the greatest mage tyrant the world has ever known. A suicide task for anyone let alone a sixteen-year-old girl with no training, facing a prophecy that foretells a fiery clash to the death.

Prince Titus of Elberon has sworn to protect Iolanthe at all costs but he’s also a powerful mage committed to obliterating the Bane to avenge the death of his family—even if he must sacrifice both Iolanthe and himself to achieve his goal.

But Titus makes the terrifying mistake of falling in love with the girl who should have been only a means to an end. Now, with the servants of the Bane closing in, he must choose between his mission and her life.

You are asking me to give up everything for a cause that isn’t mine. I don’t want to be part of any revolution. I just want to live.

Friendship is untenable for people in our position.

I’ve read some of Sherry Thomas’ historical romances and liked them, but wasn’t sure I’d like a young adult fantasy. However, I think she did a very good job with the first book of this trilogy. I hope the next two books are as good!

Have you read this book? What did you think of it?