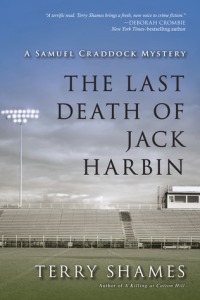 The Last Death of Jack Harbin by Terry Shames
Series: Samuel Craddock Mystery #2
Genre: Mystery
Setting: Jarrett Creek, Texas
Published by Seventh Street Books, 2014
Library book
253 pages
Grade: B+
Synopsis: Right before the outbreak of the Gulf War, two eighteen-year-old football stars and best friends from Jarrett Creek, Texas, signed up for the army. But Woody Patterson was rejected and stayed home to marry the girl they both loved, while Jack Harbin came back from the war badly damaged. The men haven’t spoken since.

Just as they are about to reconcile, Jack is brutally murdered. With the chief of police out of commission, it’s up to trusted ex-chief Samuel Craddock to investigate. Against the backdrop of small-town loyalties and betrayals, Craddock discovers dark secrets of the past and present to solve the mystery of Jack’s death.

Town Café has all the charm of a cow barn. A big tin Quonset hut, it’s pockmarked on the outside, as if it was used for target practice in some past life. Bill Schroeder trucked it in about ten years ago and plopped it onto a lot near the railroad tracks. The place has knotty pine walls decorated with random signs advertising beer and farm equipment. Christmas lights are strung all over the place, year round. But the food is good. 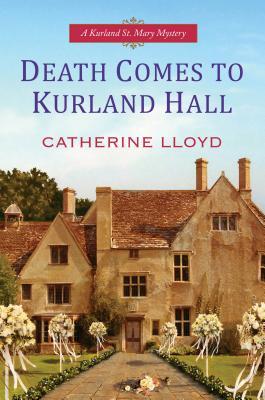 Death Comes to Kurland Hall by Catherine Lloyd
Series: Kurland St. Mary Mystery series #3
Genre: Historical Mystery
Setting: Kurland St. Mary in rural England, 1817
Published by Kensington, 2015
Library book
281 pages
Grade: B+
Synopsis: As wedding bells chime in Kurland St. Mary, a motley group of visitors descends on the village—and with a murderer on the prowl, some of them may not be returning home…

Lucy Harrington has returned to Kurland St. Mary to help with her friend Sophia Giffin’s wedding. But her homecoming is made disagreeable by the presence of Major Robert Kurland, whose bungled proposal has ruffled Lucy’s composure, and a meddling widow who has designs on her father, the village rector.

Wary of the cloying Mrs. Chingsford from the start, Lucy has doubts about the busybody’s intentions with her father. But everyone else seems to think they make an ideal match—until the courtship is curtailed when Mrs. Chingsford is found dead at the bottom of a staircase. It’s clear that it wasn’t an accident, and in hopes of finding the culprit, Lucy and Robert call a truce and begin scrutinizing the wedding guests.

But the widow left behind plenty of enemies, and when one of them is the next to turn up dead, Lucy and Robert discover that the truth is far more scandalous than anyone could have imagined…

How was she supposed to deal with someone who asked the most outrageous questions with a smile on her face? She could only pray her father wouldn’t be taken in by the sweetness for too long before he discovered the sour underneath. But then men often seemed incapable of seeing much at all. . . .

There was a bitter sound to her words, but Lucy couldn’t blame her. Unwanted or unwed female relatives had very few options if their menfolk died. 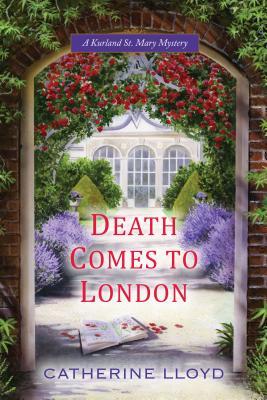 Death Comes to London by Catherine Lloyd
Series: Kurland St.Mary series #2
Genre: Historical Mystery
Setting: London and Kurland St. Mary in England, 1817
Published by Kensington, 2014
Library book
259 pages
Grade: B+
Synopsis: A season in London promises a welcome change of pace for two friends from the village of Kurland St. Mary until murder makes a debut. With the reluctant blessings of their father, the rector of Kurland St. Mary, Lucy Harrington and her sister Anna leave home for a social season in London. At the same time, Lucy’s special friend Major Robert Kurland is summoned to the city to accept a baronetcy for his wartime heroism.

Amidst the dizzying whirl of balls and formal dinners, the focus shifts from mixing and matchmaking to murder when the dowager Countess of Broughton, the mother of an old army friend of Robert, drops dead. When it’s revealed she’s been poisoned, Robert’s former betrothed, Miss Chingford, is accused, and she in turn points a finger at Anna. To protect her sister, Lucy enlists Robert’s aid in drawing out the true culprit.

But with suspects ranging from resentful rivals and embittered family members to the toast of the ton, it will take all their sleuthing skills to unmask the poisoner before more trouble is stirred up.

London was far more tiring and intimidating than Lucy had expected. As the Hathaways had engaged an extremely competent staff, she also had very little to do, which was disconcerting in itself. Apparently, living like a young lady at home was remarkably boring.

His assumption that the accumulated wisdom of generations of women was untrustworthy was slightly annoying, but not uncommon in this age of new science. Apparently, in order to be considered worthy, everything had to be proved anew. It seemed ridiculous to her. If willow bark cured a headache, and had done so for centuries, then why would one suddenly doubt it? It was typical of men to rewrite something just for the sake of it. 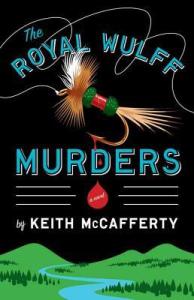 When a fishing guide reels in the body of a young man on the Madison, the Holy Grail of Montana trout rivers, Sheriff Martha Ettinger suspects foul play. It’s not just the stick jammed into the man’s eye that draws her attention; it’s the Royal Wulff trout fly stuck in his bloated lower lip. Following her instincts, Ettinger soon finds herself crossing paths with Montana newcomer Sean Stranahan.

Fly fisher, painter, and has-been private detective, Stranahan left a failed marriage and lackluster career to drive to Montana, where he lives in an art studio decorated with fly-tying feathers and mouse droppings. With more luck catching fish than clients, Stranahan is completely captivated when Southern siren Velvet Lafayette walks into his life, intent on hiring his services to find her missing brother. The clues lead Stranahan and Ettinger back to Montana’s Big Business: fly fishing. Where there’s money, there’s bound to be crime.

In Sean Stranahan’s philosophy of life, any man who had a fly rod, a quarter tank of gas, and four decent tires was never too far from home.

The rainbow marked the end of a story that had begun nearly nine months ago and he was reluctant to open his hand. Trout are the ghosts of moving waters, gone like the dreams one longs to remember. When this one glimmered away, he felt as if he’d caught smoke or that it had never been there in the first place. 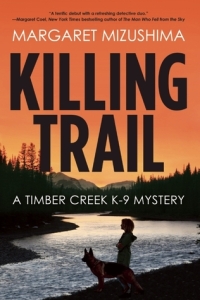 With the help of Cole Walker, local veterinarian and a single father, Mattie and Robo must track down the truth before it claims another victim. But the more Mattie investigates, the more she realizes how many secrets her hometown holds. And the key may be Cole’s daughter, who knows more than she’s saying.

The murder was just the beginning, and if Mattie isn’t careful, she and Robo could be next. Suspenseful and smart, Killing Trail is a gripping read that will have readers clamoring for more Mattie and Robo for years to come. Fans of Nevada Barr and C.J. Box will love this explosive debut.

Deputy Mattie Lu Cobb liked her new partner. In fact she was quite taken with him. She enjoyed being with him, something she’d found lacking with previous partners, and they seemed compatible. . . .

. . . Mattie stole a quick glance. Born in Russia, he was a handsome guy: straight black hair, intense brown eyes, and white teeth that flashed when he grinned. Large and muscular, strong and rugged, he was the only one in the department who could outrun her in a cross-country foot race.

When I look at these stats I come to several conclusions…lol.

What about you? How are your reading, reviewing and challenges going so far this year?

I’ve decided to add two more reading challenges to the challenges I’ve already signed up for. 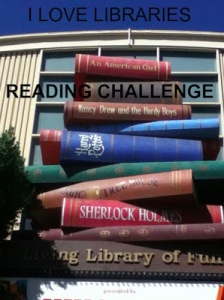 I do love libraries! The small town I grew up in didn’t have a bookstore until I was an adult. My mom took me to the library almost every Saturday morning and I could spend hours looking at books and selecting ones to check out. I loved it when I started looking in the adult section–probably when I was 10 or 11. That’s when I discovered Agatha Christie and Robert Heinlein and Andre Norton. They all opened new worlds to me.

As an adult I’ve continued to use libraries. Whenever my husband and I have moved (and we’ve moved at least a dozen times since we’ve been married) one of the first things we do is visit the library and as soon as I can I get a library card. Through the years I’ve done lots of research at libraries as well as checking out lots of books. I’ve even volunteered at my children’s school libraries.

Because my husband is taking an early retirement I’m not going to be able to buy as many books as I’ve done in the past. Using the library–both for digital editions and for physical copies of books–is one of my strategies to save money.

My goal is 18 books. I hope I read even more. I also will try to do a wrap-up post each month to show how I’m doing. 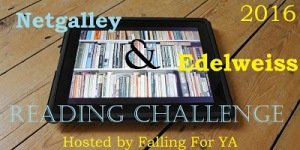 The Netgalley & Edelweiss Reading Challenge–hosted by Falling for YA.

I haven’t used Netgalley very much and I’m not signed up on Edelweiss at all. Last fall I started requesting more books and I’ve been approved for most of them. When I saw this reading challenge I decided it would be a good one for me to help keep me on track. Because I don’t have a lot of books on Netgalley yet my percentage keeps dropping every time I request a new book.

My plan is to request, read and review enough books that my percentage stays above 80%. Thus, my goal for this year is 25 books–the Gold level. And I hope to complete a wrap-up post each month.

Have you signed up for either of these challenges? Any others?