Dressed for Death in Burgundy

Synopsis: After finding herself mixed up in a murder investigation the previous Summer, Katherine Goff’s life simply has not been the same. Her husband has been in the US recording a new album, the Burgundy region locals are finally starting to see her as a real neighbor, and Katherine has even started helping out with “tourist” excursions. It seems she’s finally found her place in the small community of Reigny-sur-Canne.

But when Katherine stumbles across a body in the local museum during a tour, she finds herself caught up once again in a whirlwind of gossip and speculation. When the police zero in on her friend Pippa as a suspect, Pippa and Katherine team up to find the real killer and clear her name.

However, the more clues they discover, the more the real killer wants them off the trail. When Katherine and Pippa start receiving threats, they must decide what they are more afraid of—the police

Synopsis: Eric Matheson, an idealistic rookie cop trying to break from his powerful family, is plunged into the investigation of a brutal crime in his first weeks on the job in Angra Dastrelas, the corrupt capital city of the corporate-owned planet Gattis. A newcomer to the planet, Matheson is unaware of the danger he’s courting when he’s promoted in the field to assist the controversial Chief Investigating Forensic Officer, Inspector J. P. Dillal, the planet’s first cybernetically enhanced investigator. Coming from a despised ethnic underclass, the brilliant and secretive Dillal seems determined to unravel the crime regardless of the consequences. The deeper they dig, the more dangerous the investigation becomes. But in a system where the cops enforce corporate will, instead of the law, the solution could expose Gattis’s most shocking secrets and cost thousands of lives–including Matheson’s and Dillal’s. 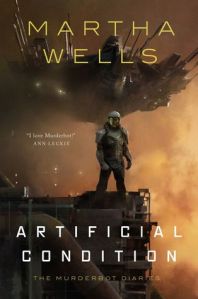 Synopsis: It has a dark past – one in which a number of humans were killed. A past that caused it to christen itself “Murderbot”.

But it has only vague memories of the massacre that spawned that title, and it wants to know more.

Teaming up with a Research Transport vessel named ART (you don’t want to know what the “A” stands for), Murderbot heads to the mining facility where it went rogue.

What it discovers will forever change the way it thinks… 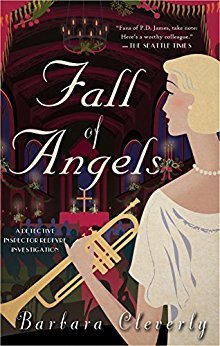 Synopsis: Great Britain, 1923: Detective Inspector John Redfyre is a godsend to the Cambridge CID. A handsome young veteran bred among the city’s educated elite, he is no stranger to the set running its esteemed colleges and universities—a society that previously seemed impenetrable to even those at the top of local law enforcement, especially with the force plagued by its own history of corruption.

When Redfyre is invited to attend the annual St. Barnabas College Christmas concert in his Aunt Henrietta’s stead, he is expecting a quiet evening, though perhaps a bit of matchmaking mischief on his aunt’s part. But he arrives to witness a minor scandal: Juno Proudfoot, the trumpeter of the headlining musical duo, is a woman, and a young one at that—practically unheard of in conservative academic circles. When she suffers a near-fatal fall after the close of the show, Redfyre must consider whether someone was trying to kill her. Has her musical talent, her beauty, or perhaps most importantly, her gender, provoked a dangerous criminal to act? Redfyre must both seek advice from and keep an eye on old friends to catch his man before more innocents fall victim.

Synopsis: It’s not every day that you’re summoned to the Italian countryside on business, so when archaeologist Angelo Morelli asks for Ruth Galloway’s help identifying bones found in the tiny hilltop town of Fontana Liri, she jumps at the chance to go, bringing her daughter along with her for a working vacation. Upon arriving, she begins to hear murmurs of Fontana Liri’s strong resistance movement during World War II and senses the townspeople are dancing around a deeply buried secret. But how could that be connected to the ancient remains she’s been studying?

Ruth is just beginning to get her footing in the dig when she’s thrown off-guard by the appearance of DCI Nelson. And when Ruth’s findings lead them to a modern-day murder, their holidays are both turned upside down, and they race to find out what darkness is lurking in this seemingly picturesque town. 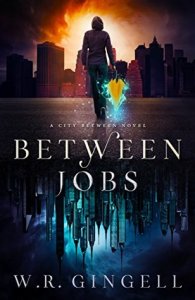 Series: The City Between #1

Synopsis: When you get up in the morning, the last thing you expect is to see a murdered guy hanging outside your window. Things like that tend to draw the attention of the local police, and when you’re squatting in your parents’ old house until you can afford to buy it, another thing you can’t afford is the attention of the cops.

It’s not my real name, but it’s the only one you’re getting. Things like names are important these days.

And it’s not so much that I’m Pet.

A human pet: I belong to the two Behindkind fae and the pouty vampire who just moved into my house. It’s not weird, I promise—well, it’s weird, yeah. But it’s not weird weird, you know?

What new books are you interested in reading this month?