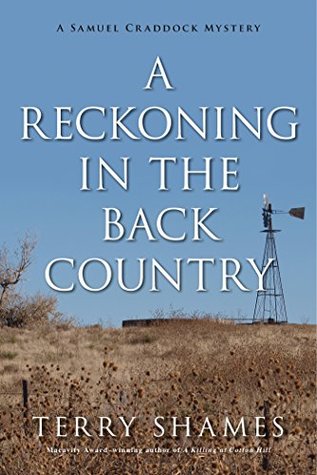 A Reckoning in the Back Country by Terry Shames

Synopsis: A neurologist from San Antonio vacationing in Jarrett Creek goes missing. When Acting Police Chief Samuel Craddock investigates, the doctor’s wife claims her husband has been kidnapped, though no ransom demands have surfaced or any other evidence.

The next day two boys hunting squirrels find his mangled body in the woods, and Craddock suspects a wild dog attack. Rumor has it that dogs bred for fighting have been let loose and run in packs in the wooded acres west of the lake. The more he looks into it, the more evidence he finds that the area where the doctor’s body was discovered has been the scene of dog-fighting contests.

But Craddock is leery about asking too many questions. In the past, Texas lawmen have turned up dead while investigating this lucrative gambling practice, and he senses that the dogs could be set on him.

I’ve read several books in this excellent mystery series. I like that Samuel Craddock is an honest, upstanding lawman. He knows the people in this part of Texas and wants to do right by them. I’m three or four books behind and I really need to read some more in this mystery series!