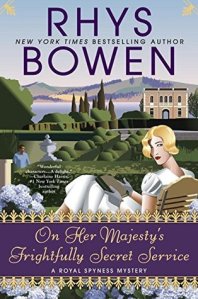 On Her Majesty’s Frightfully Secret Service

Synopsis: When royal sleuth Georgie Rannoch receives a letter from her dearest friend Belinda, who’s in an Italian villa awaiting the birth of her illegitimate baby, she yearns to run to her side. If only she could find a way to get there! But then opportunity presents itself in a most unexpected way—her cousin the queen asks her to attend a house party in the Italian Lake Country. The Prince of Wales AND the dreadful Mrs. Simpson have been invited, and Her Majesty is anxious to thwart a possible secret wedding.

What luck! A chance to see Belinda, even if it is under the guise of stopping unwanted nuptials. Only that’s as far as Georgie’s fortune takes her. She soon discovers that she attended finishing school with the hostess of the party—and the hatred they had for each other then has barely dimmed. Plus, she needs to hide Belinda’s delicate condition from the other guests. And her dashing beau, Darcy is (naturally) working undercover on a dangerous mission. Then her actress mother shows up, with a not-so-little task to perform. With all this subterfuge, it seems something is bound to go horribly wrong—and Georgie will no doubt be left to pick up the pieces when it does.

Synopsis: Former North Carolina State Bureau of Investigation agent Rachel Carver blames herself for the collateral death of an innocent woman in her last case. Unable to accept her superior’s attempts to cover up the incident, she turned in her badge. But when a former partner asks her to consult on a new murder case, she reluctantly agrees, traveling to a small, remote mountain community, where she’s tasked with leading a group of inexperienced detectives on a hunt for the killer. The trek has hardly begun when what seems to be the act of a loner proves to be much more as Rachel’s team comes under attack―and a detective is killed in the fallout.

Now that the stakes have risen, Rachel’s old employers at the SBI step in to take over the investigation. But Rachel, convinced they are on the wrong track, continues to work the case alone. And just as she delves into the town’s past, she discovers a secret history that connects the victims―one that makes her the target of a man who would kill to keep it a secret―in Among the Dead, J. R. Backlund’s gripping mystery debut.

Synopsis: Deputy Mattie Cobb is working through issues from her past and has withdrawn from Cole Walker and his family to focus on herself, when she and her K-9 partner Robo get called to track a missing junior high student. Until they find the girl on Smoker’s Hill behind the high school, dead. But that’s only the start of trouble in Timber Creek, because soon another girl goes missing–and this time it’s Sophie Walker. Hard as they search, Cole, Mattie, and Robo can’t find her anywhere. Mattie’s primary suspect, a strange man who lives near the wilderness area, calls to report he hears deer “screaming” in the woods. Suspecting the man might have lost touch with reality and be referring to something he’s done to Sophie, Mattie takes Robo into the dense pine forest, hoping to pick up a trace of her scent. But when Robo does catch Sophie’s trail, it leads them to another clue that challenges everything they thought they knew about the case. Now Mattie and Robo must rush to hunt down Sophie’s kidnapper before they’re too late in Hunting Hour, the third installment in critically acclaimed author Margaret Mizushima’s exhilarating mystery series. 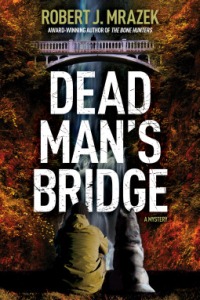 Synopsis: Disgraced former army officer Jake Cantrell and his pal, Bug, a wolf-dog he saved while in Afghanistan and the only friend he has left, try to put their bitter pasts behind them as Jake finds employment at the bottom rung of the campus security ladder of a small upstate New York college. But things only turn for the worse when the college’s richest and most powerful alumnus is found hanging from a campus footbridge on the eve of homecoming weekend.

Jake is convinced the man was murdered, but with no honor to his name, no one agrees―at least not until a second body is found hanging from the same bridge. Unable to push aside his military training, Jake and Bug finds themselves working to bring justice to the small college town. But as a vicious hurricane sweeps up the Eastern seaboard and the college’s homecoming weekend rapidly unfolds, the clock is ticking and it’s only a matter of time before the killer strikes again.

Synopsis: The search for a kidnapped child leads a courageous railway cop down a twisted trail of murder.

It’s been five months since Special Agent Sydney Parnell survived a violent confrontation with a gang of brutal thugs, an encounter that left her physically and emotionally scarred. Deep down, Sydney fears she isn’t ready for another investigation. But when a woman is murdered on the train tracks and a child is kidnapped, she knows she’s the only one who can lead the hunt for the killer. While Denver police and the FBI chase down blind alleys, Sydney focuses on a single cryptic clue left behind at the crime scene—one that will send her down a path of greed, violence, and long-ago love.

With Denver beset by a series of monsoonlike thunderstorms that threaten to flood the city, Sydney and her K9 partner, Clyde, must wade through a murky trail of murder that stretches back thirty years—all to rescue a child…and catch a killer with a long memory and an insatiable appetite for destruction. 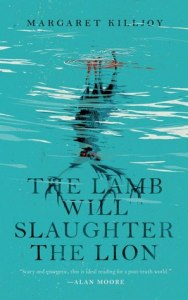 The Lamb Will Slaughter the Lion

Synopsis: Danielle Cain is a queer punk rock traveller, jaded from a decade on the road. Searching for clues about her best friend’s mysterious and sudden suicide, she ventures to the squatter, utopian town of Freedom, Iowa. All is not well in Freedom, however: things went awry after the town’s residents summoned a protector spirit to serve as their judge and executioner.

Danielle shows up in time to witness the spirit—a blood-red, three-antlered deer—begin to turn on its summoners. Danielle and her new friends have to act fast if they’re going to save the town—or get out alive.

Synopsis: Half-breed human star navigator Jaqi, working the edges of human-settled space on contract to whoever will hire her, stumbles into possession of an artifact that the leader of the Resistance wants desperately enough to send his personal guard after. An interstellar empire and the fate of the remnant of humanity hang in the balance.

Spencer Ellsworth has written a classic space opera, with space battles between giant bugs, sun-sized spiders, planets of cyborgs and a heroine with enough grit to bring down the galaxy’s newest warlord.

Synopsis: A tense and expertly-plotted debut mystery set against the bayous of Louisiana.

Baton Rouge Police Detective Wallace Hartman has had better days. With her long-time partner and mentor on medical leave and a personal life in shambles, she’s called to the scene of a particularly gruesome murder: the body of a known criminal has been found in a deserted warehouse, a snake sewn into his belly. Obvious signs of torture point to a cunning and cold-blooded killer who will stop at nothing to find what he’s looking for.

When Federal Agent Mason Cunningham arrives on the scene, Wallace expects a hostile takeover of the case. But when a scientist with ties to the victim goes missing from a government lab, she needs Mason’s federal connections as much as he needs her local insight, and the two form an uneasy partnership to solve a case that grows more complicated—and dangerous—by the minute.

Meanwhile, the killer lurks in the shadows with an agenda no one saw coming, and when Wallace and Mason threaten to get in the way they risk losing everything they hold dear. Including their lives.

Death by His Grace

Synopsis: Accra, Ghana: Katherine Yeboah’s marriage to Solomon Vanderpuye is all the talk of Accra high society. But when it becomes apparent that Katherine is infertile, Solomon’s extended family accuses her of being a witch, hounding her until the relationship is so soured Solomon feels compelled to order Katherine out of the house they shared. Alone on her last night there, Katherine is brutally murdered by an intruder.

Chief Inspector Darko Dawson of the Ghanaian federal police has personal as well as professional reasons to find the killer fast: Katherine was the first cousin of his wife, Christine, who is devastated by the tragedy. As Darko investigates, he discovers that many people close to Katherine had powerful motives to kill her, including: Solomon, her husband; James Bentsi-Enchill, her lawyer and ex-lover; and her filthy rich pastor, Bishop Clem Howard-Mills. In order to expose the truth, Darko must confront the pivotal role religion plays in Ghana—and wrestle with his old demons the investigation stirs up.