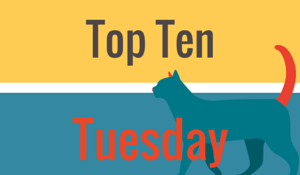 This week I’m talking about the police procedurals I’ve recently added to my TBR pile. Most of these are from authors I haven’t read before. With a few I’ve read one or two books in the series. I’m always on the lookout for new police procedurals so I’ve been happy to find these to try in the last month or so. 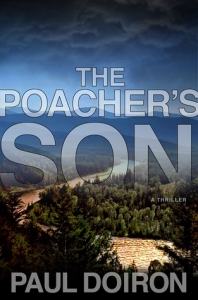 Mike Bowditch is a game warden, but I’m counting him as police officer.

The Poacher’s Son by Paul Doiron

Game warden Mike Bowditch returns home one evening to find a cryptic message on his answering machine from his father, Jack, who he hasn’t heard from in two years. The next morning Mike gets a call from the police: a beloved local cop has been killed and his father is their prime suspect.

Coming to terms with his haunted past and desperate for answers, Mike and a retired warden pilot journey deep into the Maine wilderness to clear his father’s name and find out why Jack is on the run. But the only way for Mike to save his father is to find the real killer before the killer finds him. 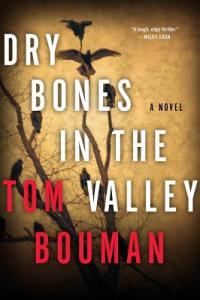 Set in rural Pennsylvania in a small community

Dry Bones in the Valley by Tom Bouman

When an elderly recluse discovers a corpse on his land, Officer Henry Farrell is drawn into a murder investigation that might tear his sleepy community apart. Tom Bouman’s chilling and evocative debut introduces one of the most memorable new characters in detective fiction and uncovers a haunting section of rural Pennsylvania, where gas drilling is bringing new wealth and eroding neighborly trust. 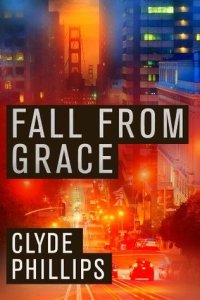 Set in San Francisco with a homicide detective. I read the second book first for some reason–now want to read the first.

Fall From Grace by Clyde Phillips

Veteran San Francisco homicide detective Jane Candiotti never had a problem drawing the line between her personal and professional lives—until the night she meets David Perry after his socialite wife, Jenna, is brutally murdered. The facts are damning: the Perrys were embroiled in a bitter divorce and now David stands to inherit millions in the wake of Jenna’s death. But Jane’s instincts tell her there’s more to this case than just greed and love gone sour.

To uncover the truth, she must dig into the sordid secrets of the city’s most powerful families, a quest that will draw her inextricably closer to David and his teenage daughter…and to the cold-blooded killer who’s stalking their every move. But when the case takes a shocking turn, it’s not just Jane’s reputation that’s hanging in the balance—it’s her life. 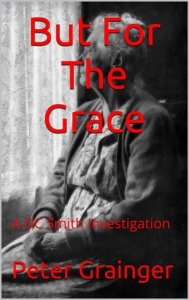 I read the first book in this series a couple of weeks ago and really liked it.

But for the Grace by Peter Grainger

“We are living in the departure lounge,” said Ralph Greenwood, “and flights leave with monotonous regularity.” So when another resident of the Rosemary House care home is found dead in her chair one Saturday evening in December, no-one is very surprised – not until the results of a routine post-mortem reveal something extraordinary. Sergeant DC Smith and his team have to tread carefully as they investigate what took place, and Smith himself has to confront some difficult memories. Others, meanwhile, seem intent on getting him to leave the force altogether, while, despite his best efforts, his social life also becomes a little more complicated. To top it all, Kings Lake has been waiting weeks for the snow to fall, in a winter that seems as if it will never end… This, the second DC Smith investigation, follows on from ‘An Accidental Death’. 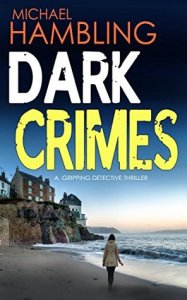 Another where I read the first book recently

A young man’s mutilated body is found on top of the Agglestone, a well-known local landmark on Studland Heath.

It seems that he was involved in a human trafficking and prostitution gang. But why is DCI Sophie Allen keeping something back from her team? Is it linked to the extraordinary discovery of her own father’s body at the bottom of a disused mineshaft, more than forty years after he disappeared? 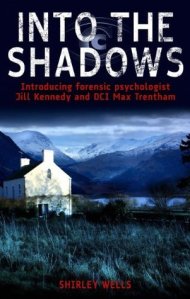 A new author and series

Into the Shadows by Shirley Wells

When Rodney Hill, wrongly arrested for a series of murders, hangs himself, Jill Kennedy, the forensic psychologist whose profile led to Hill’s arrest, gives up her work with the police and moves to the peaceful village of Kelton Bridge to write self-help books, enjoy a quiet life with her cats and perhaps an occasional flutter on the horses.

Then the likeable but unremarkable vicar’s wife, Alice Trueman, is brutally murdered, and Jill discovers that Kelton Bridge is far from the quiet refuge she had anticipated. According to DCI Max Trentham, Jill’s ex-colleague and ex-lover, the case if pretty cut and dried — Alice’s son was found standing over her body with the murder weapon in his hand. But he won’t talk.

And that’s not all. Someone is intent on reminding Jill that she made a mistake in the Rodney Hill case. Is it a malicious joke, or is there a more deadly agenda? It begins to look as if real killer — the man who should have stood in Rodney Hill’s shoes, the man still terrorizing the Lancashire Pennines — is stalking her. And that is a truly terrifying thought. 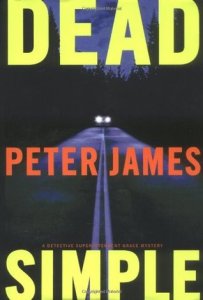 Another author I haven’t read before. Sounds depressing which I don’t like…we’ll see how this one goes.

Michael Harrison had it all: good looks, charm, natural leadership, a wicked sense of humor, and now, Ashley, his fiancée. While out celebrating with a group of friends a few nights before the wedding, Michael suddenly and unexpectedly finds himself enclosed in a coffin equipped only with a flashlight, a dirty magazine, a walkie-talkie, and a tiny breathing tube. It’s all in good fun — payback for the grief his mates suffered due to his own penchant for tomfoolery — that is until the four are killed in a drunk driving accident just moments after leaving Michael completely alone and buried alive.

Detective Superintendent Grace—himself dealing with the pain of losing his wife—is brought on to the case when Ashley reports Michael missing. Suspicions are raised when Michael’s only friend not at the bachelor party refuses to cooperate, and Ashley’s faithfulness—not to mention her increasingly mysterious past—are suddenly thrown in to question. As Superintendent Grace soon discovers, one man’s disaster is another man’s fortune. 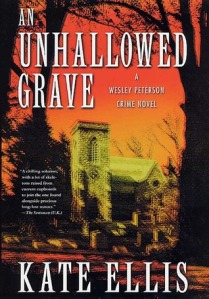 I’ve read a couple of earlier ones in this series and enjoyed them so I’m ready to continue with the next one.

An Unhallowed Grave by Kate Ellis

When the body of a middle-aged woman is found hanging from a yew tree in Stokeworthy Churchyard, the police suspect foul play. But the victim is an unlikely one. Pauline Brent was the local doctor’s receptionist, respected and well liked. She seems to have no real enemies-and yet someone killed her.

Detective Sergeant Wesley Peterson, a black detective recently transferred to the quiet, West Country English village, is determined to discover the truth and, once again, it is history that provides him with a clue. For Wesley’s archaeologist friend, Neil Watson, has excavated an ancient corpse at a nearby dig: a woman who had been buried at a crossroads, on unhallowed ground. It appears that the body is that of the same woman whom local legend has it was publicly executed in the churchyard centuries before.

A chilling echo of the fifteenth-century lynching, Pauline Brent’s death forces Wesley to consider the possibility that the killer also knows the tree’s dark history. Has Pauline been “executed” rather than murdered-and if so, for what crime?

To catch a dangerous killer, Wesley has to discover as much as he can about the victim. But Pauline Brent appears to have been a woman with few friends, no relatives, and a past she has tried carefully to hide… 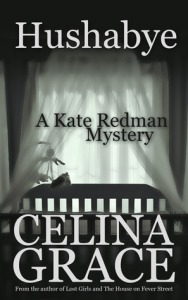 Another new series to try!

A missing baby. A murdered girl. A case where everyone has something to hide…

Hushabye (A Kate Redman mystery) is the new novel from crime writer Celina Grace, author of Lost Girls and The House on Fever Street.

On the first day of her new job in the West Country, Detective Sergeant Kate Redman finds herself investigating the kidnapping of Charlie Fullman, the newborn son of a wealthy entrepreneur and his trophy wife. It seems a straightforward case… but as Kate and her fellow officer Mark Olbeck delve deeper, they uncover murky secrets and multiple motives for the crime.

Kate finds the case bringing up painful memories of her own past secrets. As she confronts the truth about herself, her increasing emotional instability threatens both her hard-won career success and the possibility that they will ever find Charlie Fullman alive… 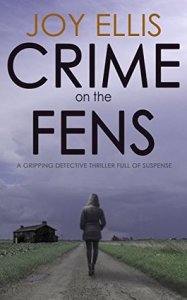 I found this on sale at Audible!

Crime on the Fens by Joy Ellis

THE DETECTIVE DI Nikki Galena: A police detective with nothing left to lose, she’s seen a girl die in her arms, and her daughter will never leave the hospital again. She’s got tough on the criminals she believes did this to her. Too tough. And now she’s been given one final warning: make it work with her new sergeant, DS Joseph Easter, or she’s out.

HER PARTNER DS Joseph Easter is the handsome squeaky-clean new member of the team. But his nickname “Holy Joe” belies his former life as a soldier. He has an estranged daughter who blames him for everything that went wrong with their family.

THEIR ADVERSARY is a ruthless man who holds DI Galena responsible for his terrible disfigurement.

The town is being terrorised by gangs of violent thugs, all wearing identical hideous masks. Then a talented young female student goes missing on the marsh and Nikki and Joseph find themselves joining forces with a master criminal in their efforts to save her. They need to look behind the masks, but when they do, they find something more sinister and deadly than they ever expected . . .

What books are you adding to your TBR pile? What genre are they mostly from?