This week I’m talking about the books I’m most Anticipating for the second half of 2017. I know these aren’t all the books I will be excited about, but these are the books I’m aware of now!

One of my very favorite series! 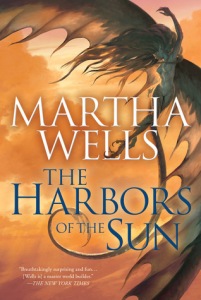 The Harbors of the Sun

Series: The Books of the Raksura #5

Synopsis: A former friend has betrayed the Raksura and their groundling companions, and now the survivors must race across the Three Worlds to rescue their kidnapped family members. When Moon and Stone are sent ahead to scout, they quickly encounter an unexpected and potentially deadly ally, and decide to disobey the queens and continue the search alone. Following in a wind-ship, Jade and Malachite make an unlikely alliance of their own, until word reaches them that the Fell are massing for an attack on the Reaches, and that forces of the powerful Empire of Kish are turning against the Raksura and their groundling comrades.

But there may be no time to stage a rescue, as the kidnapped Raksura discover that their captors are heading toward a mysterious destination with a stolen magical artifact that will cause more devastation for the Reaches than anything the lethal Fell can imagine. To stop them, the Raksura will have to take the ultimate risk and follow them into forbidden territory.

I loved the first book in this series.

Arabella and the Battle of Venus

The swashbuckling Arabella Ashby is back for brand new adventure in the ongoing story of her life among the stars.

Arabella’s wedding plans to marry Captain Singh of the Honorable Mars Trading Company are interrupted when her fiancé is captured by the French and sent to a prisoner-of-war camp on swampy Venus. Now, Arabella must find passage to an enemy-controlled planet in the middle of a war, bribe or fight her way past vicious guards, and rescue her Captain.

To do this she must enlist the help of the dashing privateer, Daniel Fox of the Touchstone and build her own clockwork navigational automaton in order to get to Venus before the dread French general, Joseph Fouché, the Executioner of Lyon.

Once on Venus, Arabella, Singh, and Fox soon discover that Napoleon has designed a secret weapon, one that could subjugate the entire galaxy if they can’t discover a way to stop Fouché, and the entire French army, from completing their emperor’s mandate.

This is a great self-published series about dragons!

A Dragon of a Different Color

Synopsis: To save his family from his tyrannical mother, Julius had to step on a lot of tails. That doesn’t win a Nice Dragon many friends, but just when he thinks he’s starting to make progress, a new threat arrives. Turns out, things can get worse. Heartstriker hasn’t begun to pay for its secrets, and the dragons of China are here to collect. When the Golden Emperor demands his surrender, Julius will have to choose between loyalty to the sister who’s always watched over him and preserving the clan he gave everything to protect.

An urban fantasy and a romance. I don’t read much romance, but this is a really good series and one of my favorite authors.

Synopsis: Just when Nevada Baylor has finally come to accept the depths of her magical powers, she also realizes she’s fallen in love. Connor “Mad” Rogan is in many ways her equal when it comes to magic, but she’s completely out of her elements when it comes to her feelings for him. To make matters more complicated, an old flame comes back into Rogan’s life…

Rogan knows there’s nothing between him and his ex-fiance, Rynda Sherwood. But as Nevada begins to learn more about her past, her power, and her potential future, he knows she will be faced with choices she never dreamed of and the promise of a life spent without him.

As Nevada and Rogan race to discover the whereabouts of Rynda’s kidnapped husband and are forced to confront Nevada’s grandmother, who may or may not have evil motives, these two people must decide if they can trust in each other or allow everything to go up in smoke.

This series gets better and better.

On Her Majesty’s Frightfully Secret Service

Synopsis: When royal sleuth Georgie Rannoch receives a letter from her dearest friend Belinda, who’s in an Italian villa awaiting the birth of her illegitimate baby, she yearns to run to her side. If only she could find a way to get there! But then opportunity presents itself in a most unexpected way—her cousin the queen asks her to attend a house party in the Italian Lake Country. The Prince of Wales AND the dreadful Mrs. Simpson have been invited, and Her Majesty is anxious to thwart a possible secret wedding.

What luck! A chance to see Belinda, even if it is under the guise of stopping unwanted nuptials. Only that’s as far as Georgie’s fortune takes her. She soon discovers that she attended finishing school with the hostess of the party—and the hatred they had for each other then has barely dimmed. Plus, she needs to hide Belinda’s delicate condition from the other guests. And her dashing beau, Darcy is (naturally) working undercover on a dangerous mission. Then her actress mother shows up, with a not-so-little task to perform. With all this subterfuge, it seems something is bound to go horribly wrong—and Georgie will no doubt be left to pick up the pieces when it does.

I love police procedurals and reading about K-9 dogs so these books are favorites. 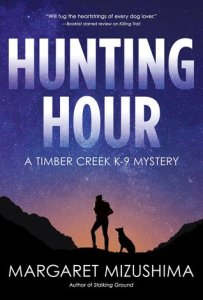 Synopsis: Deputy Mattie Cobb is working through issues from her past and has withdrawn from Cole Walker and his family to focus on herself, when she and her K-9 partner Robo get called to track a missing junior high student. Until they find the girl on Smoker’s Hill behind the high school, dead. But that’s only the start of trouble in Timber Creek, because soon another girl goes missing–and this time it’s Sophie Walker. Hard as they search, Cole, Mattie, and Robo can’t find her anywhere. Mattie’s primary suspect, a strange man who lives near the wilderness area, calls to report he hears deer “screaming” in the woods. Suspecting the man might have lost touch with reality and be referring to something he’s done to Sophie, Mattie takes Robo into the dense pine forest, hoping to pick up a trace of her scent. But when Robo does catch Sophie’s trail, it leads them to another clue that challenges everything they thought they knew about the case. Now Mattie and Robo must rush to hunt down Sophie’s kidnapper before they’re too late in Hunting Hour, the third installment in critically acclaimed author Margaret Mizushima’s exhilarating mystery series.

I haven’t read anything by this author, but the main character is a former army officer with a wolf-dog friend.

Synopsis: Disgraced former army officer Jake Cantrell and his pal, Bug, a wolf-dog he saved while in Afghanistan and the only friend he has left, try to put their bitter pasts behind them as Jake finds employment at the bottom rung of the campus security ladder of a small upstate New York college. But things only turn for the worse when the college’s richest and most powerful alumnus is found hanging from a campus footbridge on the eve of homecoming weekend.

Jake is convinced the man was murdered, but with no honor to his name, no one agrees―at least not until a second body is found hanging from the same bridge. Unable to push aside his military training, Jake and Bug finds themselves working to bring justice to the small college town. But as a vicious hurricane sweeps up the Eastern seaboard and the college’s homecoming weekend rapidly unfolds, the clock is ticking and it’s only a matter of time before the killer strikes again.

I read the first book in this series last fall and loved it.

Synopsis: The search for a kidnapped child leads a courageous railway cop down a twisted trail of murder.

It’s been five months since Special Agent Sydney Parnell survived a violent confrontation with a gang of brutal thugs, an encounter that left her physically and emotionally scarred. Deep down, Sydney fears she isn’t ready for another investigation. But when a woman is murdered on the train tracks and a child is kidnapped, she knows she’s the only one who can lead the hunt for the killer. While Denver police and the FBI chase down blind alleys, Sydney focuses on a single cryptic clue left behind at the crime scene—one that will send her down a path of greed, violence, and long-ago love.

With Denver beset by a series of monsoonlike thunderstorms that threaten to flood the city, Sydney and her K9 partner, Clyde, must wade through a murky trail of murder that stretches back thirty years—all to rescue a child…and catch a killer with a long memory and an insatiable appetite for destruction.

This is a Tor.com book. I’m really liking the books they’re publishing plus this is space opera! 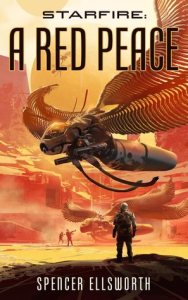 Synopsis: Half-breed human star navigator Jaqi, working the edges of human-settled space on contract to whoever will hire her, stumbles into possession of an artifact that the leader of the Resistance wants desperately enough to send his personal guard after. An interstellar empire and the fate of the remnant of humanity hang in the balance.

Spencer Ellsworth has written a classic space opera, with space battles between giant bugs, sun-sized spiders, planets of cyborgs and a heroine with enough grit to bring down the galaxy’s newest warlord.

Another mystery series in which I read the first book last fall. Looking forward to seeing what Kate Fox does next!

Synopsis: Reeling from her recent divorce, Kate Fox has just been sworn in as Grand County, Nebraska Sheriff when tragedy strikes. A railroad accident has left engineer Chad Mills dead, his conductor Bobby Jenkins in shock. Kate soon realizes that the accident was likely murder.

Who would want to kill Chad Mills? Kate finds that he made a few enemies as president of the railroad workers union. Meanwhile his widow is behaving oddly. And why was his neighbor Josh Stevens at the Mills house on the night of the accident?

While her loud and meddling family conspires to help Kate past her divorce, State Patrol Officer Trey closes in on Josh Stevens as the suspect. Kate doesn’t believe it. She may not have the experience, but she’s lived in the Sandhills her whole life, and knows the land and the people. Something doesn’t add up―and Kate must find the real killer before he can strike again.

What books are you looking forward to the last half of 2017?