Kimberly hosts the Sunday Post each week. I like to take part because it gives me an opportunity to look back at last week and forward to next week in both my personal life and my blog and book life! I also love to see what other people are doing and what books everyone is reading.

The weather is beautiful here. A little rain earlier in the week and now lots of sun and temps in the 70’s. I don’t know if the weather or just the time of year has made my allergies go into hyper drive. I blew my nose and my eyes itched all week, but I had a couple of days with allergies all day and went through at least a box of Kleenex everyday.

We moved forward with our fence building this weekend. We got the rest of our lumber delivered on Friday afternoon and put in the rest of the fence posts. On Saturday my husband and I started to put in the side pieces and then even put up some of the fence slats. By Saturday evening we were really tired!

I did get a few herbs planted this week and hope to get a few more plants to plant this week.

Not a lot of blogging. I’m hoping next week will work better.

The Collapsing Empire by John Scalzi

Watching the Detectives by Julie Mulhern

Some books I got recently

All Systems Red by Martha Wells

Dead Over Heels by Charlaine Harris

Interesting on the Internet

Sync is back! Every week until August 16 two young adult audiobooks are free to download. These books are young adult titles so if that’s your favorite genre check them out.

Audiobooks available during May 4 – 10:

For Titus and his friends, it started out like any ordinary trip to the moon—a chance to party during spring break and play with some stupid low-grav at the Ricochet Lounge. But that was before the crazy hacker caused all their feeds to malfunction, sending them to the hospital to lie around with nothing inside their heads for days. And it was before Titus met Violet, a beautiful, brainy teenage girl who has decided to fight the feed and its omnipresent ability to categorize human thoughts and desires. Following in the footsteps of George Orwell, Anthony Burgess, and Kurt Vonnegut Jr., M. T. Anderson has created a not-so-brave new world—and a smart, savage satire that will captivate listeners with its view of an imagined future that veers unnervingly close to the here and now.

Seconds before the Earth is demolished to make way for a galactic freeway, Arthur Dent is plucked off the planet by his friend Ford Prefect, a researcher for the revised edition of The Hitchhiker’s Guide to the Galaxy who, for the last fifteen years, has been posing as an out-of-work actor.

Together this dynamic pair begin a journey through space aided by quotes from The Hitchhiker’s Guide (“A towel is about the most massively useful thing an interstellar hitchhiker can have”) and a galaxy-full of fellow travelers: Zaphod Beeblebrox–the two-headed, three-armed ex-hippie and totally out-to-lunch president of the galaxy; Trillian, Zaphod’s girlfriend (formally Tricia McMillan), whom Arthur tried to pick up at a cocktail party once upon a time zone; Marvin, a paranoid, brilliant, and chronically depressed robot; Veet Voojagig, a former graduate student who is obsessed with the disappearance of all the ballpoint pens he bought over the years.

Where are these pens? Why are we born? Why do we die? Why do we spend so much time between wearing digital watches? For all the answers stick your thumb to the stars. And don’t forget to bring a towel!

Audiobooks available during May 11 – 17 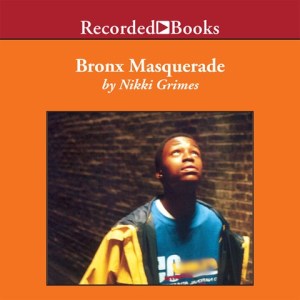 Acclaimed poet, novelist, journalist, and educator Nikki Grimes was born and raised in New York City. Each of the 18 kids in Mr. Ward’s inner city classroom has something important to say, but some don’t even realize it. Then Mr. Ward begins to have “open mic” poetry slams once a month on Fridays. Young adult listeners will identify with the characters in Bronx Masquerade as they explore questions about life and self-expression. “As always, Grimes gives young people exactly what they’re looking for-real characters who show them they are not alone.”-School Library Journal

Teenage Diaries: Then and Now by Radio Diaries | Read by Hosted by Joe Richman

They conduct interviews, keep audio journals, and record the sounds of daily life; usually collecting more than 30 hours of raw tape over the course of a year, edited into documentaries airing on NPR’s All Things Considered. Whether it’s the story of Amanda, a gay teen trying to understand her sexuality, or the story of Juan, who crossed the Rio Grande with his family illegally, these stories offer insight into the mysterious life of teenagers. Sixteen years later, five of those diarists return to chronicle their grown-up lives.

What did you do last week? What did you read? What books did you collect? What are you planning?