These are the May books on my list. I keep a list of all the books I might want to read and add to it as the year goes on. As each month comes along I create a list on my blog for others and for me to keep track of as

I hope people reading my post find some new books to read. I also hope these people will point me toward books I missed.

Murder Between the Lines

Synopsis: In the second book in the acclaimed Kitty Weeks Mystery series, Kitty is tasked with writing a story about Westfield Hall, a prestigious girls’ boarding school. Tragedy strikes when a student named Elspeth is found frozen to death in Central Park. The doctors proclaim that the girl’s sleepwalking was the cause, but Kitty isn’t so sure.

Determined to uncover the truth, Kitty must investigate a more chilling scenario—a murder that may involve Elspeth’s scientist father and a new invention by Thomas Edison.

For fans of Susan Elia MacNeal and Jacqueline Winspear, Murder Between the Lines is a rich and spirited novel with irresistible charm, combining true historical events with a thrilling mystery.

Synopsis: The luck runs rough around Theo Waitley. Not only are people trying to kill her and capture the self-aware intelligent ship Bechimo to whom Theo is bonded, they’re also trying to arrest her crew members, and throw the dignity of an important passenger, the duly-constituted norbear ambassador Hevelin, into question.

No wonder Theo and her crew felt the need of a break, and retired to what Bechimo refers to as “safe space.” Unfortunately, safe space may not be so safe, anymore.  It seems that things are leaking through from another universe, and another time. In fact, whole spaceships are coming through.  One of those ships is a blasted battleship seemingly fleeing a long-lost war. What’s more, its crew may be members of Theo’s ancient ancestral line—her relatives. It’s certain that they are in dire need of help. Theo has a choice to make. It seems that Bechimo’s “safe space” is about to become deadly perilous.

Synopsis: In a corporate-dominated spacefaring future, planetary missions must be approved and supplied by the Company. Exploratory teams are accompanied by Company-supplied security androids, for their own safety.

But in a society where contracts are awarded to the lowest bidder, safety isn’t a primary concern.

On a distant planet, a team of scientists are conducting surface tests, shadowed by their Company-supplied ‘droid — a self-aware SecUnit that has hacked its own governor module, and refers to itself (though never out loud) as “Murderbot.” Scornful of humans, all it really wants is to be left alone long enough to figure out who it is.

But when a neighboring mission goes dark, it’s up to the scientists and their Murderbot to get to the truth.

Synopsis: The Rosalind Thorne mystery series—inspired by the novels of Jane Austen—continues as the audacious Rosalind strives to aid those in need while navigating the halls of high society…

Rosalind Thorne has slowly but assuredly gained a reputation as “a useful woman”—by helping respectable women out of some less-than-respectable predicaments.

Her latest endeavor is a tragedy waiting to happen. Desperate Margaretta Seymore is with child—and her husband is receiving poisoned pen letters that imply that her condition is the result of an affair with the notorious actor Fletcher Cavendish. Margaretta asks Rosalind to find out who is behind the scurrilous letters. But before she can make any progress, Cavendish is found dead, stabbed through the heart.

Suddenly, Rosalind is plunged into the middle of one of the most sensational murder trials London has ever seen, and her client’s husband is the prime suspect. With the help of the charming Bow Street runner Adam Harkness, she must drop the curtain on this fatal drama before any more lives are ruined. 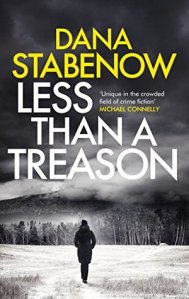 Less Than a Treason

They vanish in the middle of mountain footraces, on fishing boats in the Bering Sea, on small planes in the Bush. Now a geologist known for going walkabout with his rock hammer has disappeared from the Suulutaq Mine in the Park. Was it deliberate? An accident? Foul play? Kate Shugak may be the only person who can find out.

But for the fact that Kate, too, is among the missing… 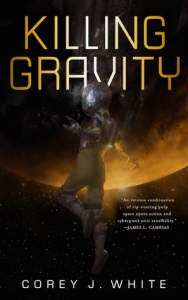 Synopsis: Mariam Xi can kill you with her mind. She escaped the MEPHISTO lab where she was raised as a psychic supersoldier, which left her with terrifying capabilities, a fierce sense of independence, a deficit of trust and an experimental pet named Seven. She’s spent her life on the run, but the boogeymen from her past are catching up with her. An encounter with a bounty hunter has left her hanging helpless in a dying spaceship, dependent on the mercy of strangers.

Penned in on all sides, Mariam chases rumors to find the one who sold her out. To discover the truth and defeat her pursuers, she’ll have to stare into the abyss and find the secrets of her past, her future, and her terrifying potential.

Synopsis: In the early 20th Century, the United States government concocted a plan to import hippopotamuses into the marshlands of Louisiana to be bred and slaughtered as an alternative meat source. This is true.

Other true things about hippos: they are savage, they are fast, and their jaws can snap a man in two.

This was a terrible plan.

Synopsis: Nevada Baylor has a unique and secret skill—she knows when people are lying—and she’s used that magic (along with plain, hard work) to keep her colorful and close-knit family’s detective agency afloat. But her new case pits her against the shadowy forces that almost destroyed the city of Houston once before, bringing Nevada back into contact with Connor “Mad” Rogan.

Rogan is a billionaire Prime—the highest rank of magic user—and as unreadable as ever, despite Nevada’s “talent.” But there’s no hiding the sparks between them. Now that the stakes are even higher, both professionally and personally, and their foes are unimaginably powerful, Rogan and Nevada will find that nothing burns like ice … 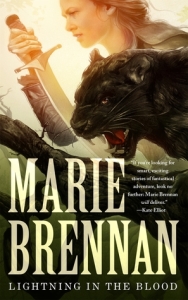 Lightning in the Blood

Synopsis: Once, there was a call–a binding–and so, a woman appeared, present in body but absent in knowledge of her past self. Making the ultimate journey of rediscovery was not without its own pitfalls–or rewards–and now Ree, a roaming Archeron, spirit of legend and time and physically now bound to her current form, has yet to fully uncover her true identity.

Ree has spent her last innumerable seasons on the move–orbiting, in some sense, the lands of her only friend in this world, Aadet, who has become intricately involved in the new post-revolution politics of his people. Swinging back from the forests surrounding Solaike, Ree falls in with another wandering band, some Korenat refugees searching for their own protection on a trade route besieged with the fallout of the recent uprising. The Korenat’s plight might not have striken Ree so deeply, but they are accompanied by their own Archeron, who seems to know much more about Ree’s own origins than she ever dared to hope.

Lushly woven against a foreign, and yet familiar, fantastical setting, this is the second epic adventure in Marie Brennan’s novella series with Tor.com. Only such an acclaimed and beloved fantasist could so deftly handle the intricacies of self and society, the struggle between reclaiming one’s own fate and suffering the ravages that time brings to every life.