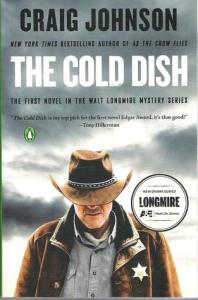 The Cold Dish by Craig Johnson

Walt Longmire, sheriff of Wyoming’s Absaroka County, knows he’s got trouble when Cody Pritchard is found dead. Two years earlier, Cody and three accomplices had been given suspended sentences for raping a Northern Cheyenne girl. Is someone seeking vengeance? Longmire faces one of the more volatile and challenging cases in his twenty-four years as sheriff and means to see that revenge, a dish that is best served cold, is never served at all.

TV series. I’ve watched some of the Longmire TV series on Netflix and enjoyed it so I decided to start reading some of the books.

I really like Walt Longmire. Of course, since I’ve watched the TV show my thoughts are colored by watching that series. To me Robert Taylor (Walt Longmire), Lou Diamond Phillips (Henry Standing Bear) and Katee Sackhoff (Victoria “Vic” Moretti) seem perfect for their roles. These main characters are very familiar after watching the TV series. As I read more of the books I’ll have to decide if I continue to think that.

Narrator. When I started listening to the audiobook I didn’t like the narrator (George Guidall) very well. However, by the end of the book I decided he did a good job. I really like the different voices he uses for different characters. I have the second book as an audiobook, too, so I will get to listen to him again and make a further evaluation.

My thoughts. Walt seems depressed through much of the book. (That may be why I didn’t like the narrator to begin with.) The murders of young men convicted of rape (but given suspended sentences) of a young native American girl several years before is an absorbing mystery. It’s hard not to want vengeance for the young girl. But Walt has to find a murderer even if he abhorred the original crime.

Even though Walt is depressed he still has a personal code, belief in justice and he does his job. Henry Standing Bear is a good friend–even when Walt sometimes doesn’t want a friend. It’s nice to see such a strong friendship.

The book has a lot of wry, self-deprecating humor–mostly Walt’s.

There are only three major vote getting days in Absoroka County, and I can’t remember the other two. “Oh God, no. It’s Pancake Day.” I thought about shooting myself. I could see the headlines: Sheriff shoots self, unable to face pancakes.

I like the mysticism that sometimes shows through in the story. Henry Standing Bear takes it for granted, but Walt isn’t always comfortable when he comes face-to-face with it.

I sometimes forgot about how spiritual Henry was. I had been raised as a Methodist where the highest sacrament was the bake sale.

The story and mystery are absorbing right to the end. The time Walt and Henry spend on the mountain is absorbing reading. I grew up in Central Oregon so mountains and winter were often scary times when people were lost in the mountains. I also have many relatives in Eastern Oregon who are ranch owners so I’m familiar with western lands and cowboys. When my husband and I drove through Wyoming and Montana in September 2016 the land seemed so familiar to me. Sometimes I long to step into the fictional land of books like Craig Johnson writes–the lands where a cowboy code often still exists.

I have the second book in the series and want to read it soon.

Have you read books in this series? Or have you watched the TV series?

2 thoughts on “Review: The Cold Dish by Craig Johnson”