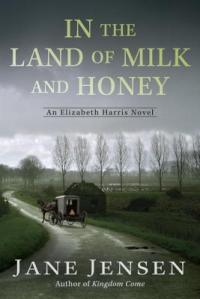 In the Land of Milk and Honey by Jane Jensen
Series: Elizabeth Harris Mystery #2
Genre: Mystery, Police Procedural
Setting: Lancaster County, Pennsylvania
Published by Berkley
Format: e-Arc (Release Date: August 2)
–I received a review copy of this book from the Publisher in exchange for an honest review. The opinions stated here are entirely my own.
304 pages
Grade: B+
Synopsis: With its peaceful, hardworking Amish population, Lancaster County, Pennsylvania, is a rural paradise. But former NYPD homicide detective Elizabeth Harris knows that evil lurks there—it’s just easier to hide…

By solving the murders of two local girls, Elizabeth has gained some trust in the Amish community. So, she’s the first person its members turn to when a fast and fatal illness takes hold, though many believe that the sickness stems from a hexerei—a curse placed by a practitioner of old-world folk magic. Elizabeth doesn’t believe in curses, and when an entire Amish family is found dead, she begins to suspect something far more sinister…

As the CDC is called in to investigate, customers of a Philadelphia farmers market selling Amish raw milk start dying. Amid rapidly escalating panic, Elizabeth must peel away layers of superstition and fear to save the livelihood—and lives—of an entire community. Because what has happened isn’t an accident of nature or an act of God, it’s the handiwork of someone who has only just begun to kill…