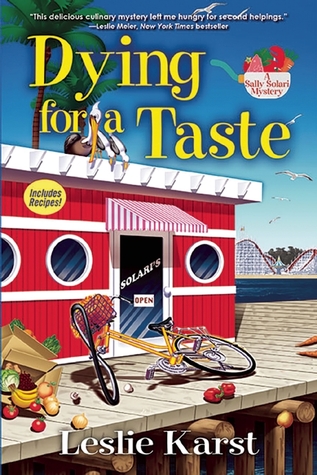 Dying for a Taste by Leslie Karst
Series: Sally Solari Mystery #1
Genre: Mystery (c0zy)
Setting: Santa Cruz, California
Published by Crooked Lane Books
Format: e-Arc (Release Date: April 12)
–I received a review copy of this book from the Publisher in exchange for an honest review. The opinions stated here are entirely my own.
304 pages
Grade: B
Synopsis: After losing her mother to cancer, Sally Solari quits her job as an attorney to help her dad run his old-style Italian eatery in Santa Cruz, California. But managing the front of the house is far from her dream job.

Then in a sudden twist her Aunt Letta is found murdered in her own restaurant, and Sally is the only one who can keep the place running. But when her sous chef is accused of the crime, and she finds herself suddenly short-staffed, Sally must delve into the world of sustainable farming—not to mention a few family secrets–to help him clear his name and catch the true culprit before her timer runs out.

Leslie Karst serves a platter of intrigue in her stirring and satisfying debut Dying for a Taste, which is sure to become a new favorite of food mystery fans.

2 thoughts on “Dying for a Taste by Leslie Karst”