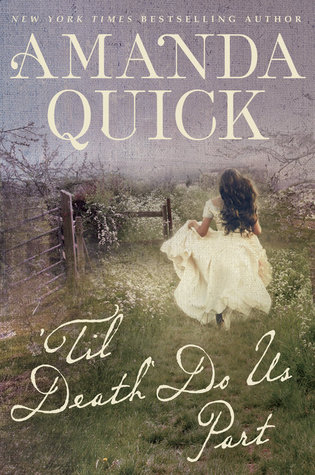 Excerpt from ‘Til Death Do Us Part by Amanda Quick

I reviewed this book yesterday. I really like it–gave it a B+. This excerpt comes from the beginning of the book and luckily there aren’t too many from this point-of-view! This POV really creeped me out…l0l. I like that the book is suspense and also historical romance!

She belonged to him.

He was locked inside a cage the size and shape of a coffin. A dark thrill heated his blood like a powerful, intoxicating drug.

When the time came he would purify the woman and cleanse himself with her blood. But tonight was not the time. The ritual had to be followed correctly. The woman must be made to comprehend and acknowledge the great wrong that she had done. There was no finer instructor than fear.

He huddled inside the concealed lift, listening to the sounds of someone moving about in the bedroom on the other side of the wall. There was a narrow crack in the paneling. Excitement sparked through him when he caught a glimpse of the woman. She was at her dressing table, adjusting the pins in her dark brown hair. It was as if she knew he was watching and was deliberately taunting him.

She was passable in appearance, but he had seen her on the street and had not been particularly impressed with her looks. She was overly tall for a woman and her forceful character was etched on her face. She was dangerous. It was all there in her unnerving eyes.

The woman rose from the dressing table chair and moved out of sight. A moment later he heard the muffled sound of the bedroom door opening and closing.

He slid the cage door aside and opened the wooden panel. The wall sconce had been turned down low but he could make out the bed, the dressing table, and the wardrobe.

He moved out of the lift. The heady exhilaration he always experienced at such moments roared through him. With every step of the ritual he came closer to achieving his own purification.

For a precious few seconds he debated where to leave his gift. The bed or the dressing table?

The bed, he decided. So much more intimate.

He made his way out through the tradesmen’s entrance and slipped, unseen, into the gardens. The gate was still unlocked, just as he had left it.

A few minutes later he was lost in the fog. The weight of the knife in its sheath beneath his greatcoat was reassuring.

The ritual was almost complete.

The woman with the unnerving eyes would soon understand that she belonged to him. It was her destiny to be the one to cleanse him. He was certain of it. The connection between them was a bond that could be shattered only by death.