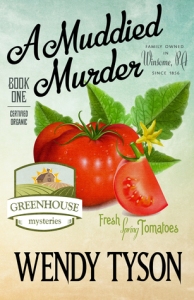 A Muddied Murder by Wendy Tyson
Series: A Greenhouse Mystery #1
Genre: Mystery (cozy)
Setting: Winsome, Pennsylvania
Published by Henery Press, 2016
Format: e-Arc (Release Date: March 29)
–I received a review copy of this book from the Publisher in exchange for an honest review. The opinions stated here are entirely my own.
235 pages
Grade: B+
Synopsis: When Megan Sawyer gives up her big-city law career to care for her grandmother and run the family’s organic farm and café, she expects to find peace and tranquility in her scenic hometown of Winsome, Pennsylvania. Instead, her goat goes missing, rain muddies her fields, the town denies her business permits, and her family’s Colonial-era farm sucks up the remains of her savings.

Just when she thinks she’s reached the bottom of the rain barrel, Megan and the town’s hunky veterinarian discover the local zoning commissioner’s battered body in her barn.  Now Megan is thrust into the middle of a murder investigation—and she’s the chief suspect. Can Megan dig through small-town secrets, local politics, and old grievances in time to find a killer before that killer strikes again?