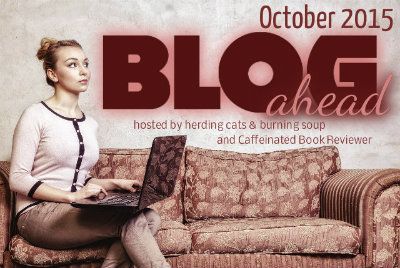 Blog Ahead is over. How did I do?

I ended up with 10 posts ahead. Not my goal, but I figure any posts ahead will help me and I have another 10 posts at various stages of completion so I plan to continue to increase my scheduled posts as I move forward!

Thanks, Anna @ herding cats & burning soup and Kimberly @ Caffeinated Book Reviewer for the Blog Ahead 2015 Challenge!I’m encouraged to have so many posts ready. 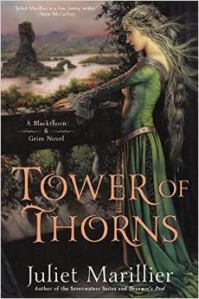 Tower of Thorns by Juliet Marillier
Series: Blackthorn & Grim #2
Genre: Historical Fantasy
Setting: Ancient Ireland
Published by Roc, 2015
Format: e-Arc (Release Date: Nov 3, 2015)
–I received a review copy of this book from the Publisher in exchange for an honest review. The opinions stated here are entirely my own.
448 pages
Grade: B+
Synopsis: Disillusioned healer Blackthorn and her companion, Grim, have settled in Dalriada to wait out the seven years of Blackthorn’s bond to her fey mentor, hoping to avoid any dire challenges. But trouble has a way of seeking out Blackthorn and Grim.

Lady Geiléis, a noblewoman from the northern border, has asked for the prince of Dalriada’s help in expelling a howling creature from an old tower on her land—one surrounded by an impenetrable hedge of thorns. Casting a blight over the entire district, and impossible to drive out by ordinary means, it threatens both the safety and the sanity of all who live nearby. With no ready solutions to offer, the prince consults Blackthorn and Grim.

As Blackthorn and Grim begin to put the pieces of this puzzle together, it’s apparent that a powerful adversary is working behind the scenes. Their quest is about to become a life and death struggle—a conflict in which even the closest of friends can find themselves on opposite sides.