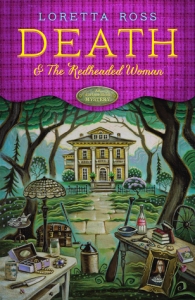 As someone who appraises and prepares houses for auction, Wren Morgan has seen her share of fixer-uppers. But when she arrives at her newest project, Wren is unprepared to find something she can’t easily fix–a naked, dead man.

Soon after her disturbing discovery, Wren meets Death Bogart, a private investigator and surety recovery agent who’s looking for the famous missing jewels of the Campbell family. When it becomes clear that there are actually two sets of lost family jewels, Wren and Death team up to solve not only the mystery of the jewels, but also the naked man’s murder. With their case growing more and more complex, though, will they be able to catch the killer and bring home the loot?