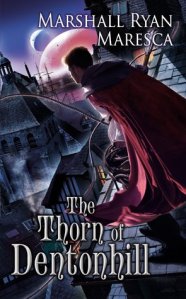 The Thorn of Dentonhill
by Marshall Ryan Maresca
Series: Maradaine #1
Genre: Fantasy
Setting: Archduchy of Maradaine
Published by DAW, 2015
E-book, purchased
400 pages
Grade: B-
Synopsis: Veranix Calbert leads a double life. By day, he’s a struggling magic student at the University of Maradaine. At night, he spoils the drug trade of Willem Fenmere, crime boss of Dentonhill and murderer of Veranix’s father. He’s determined to shut Fenmere down.

With that goal in mind, Veranix disrupts the delivery of two magical artifacts meant for Fenmere’s clients, the mages of the Blue Hand Circle.  Using these power-filled objects in his fight, he quickly becomes a real thorn in Fenmere’s side.

So much so that soon not only Fenmere, but powerful mages, assassins, and street gangs all want a piece of “The Thorn.” And with professors and prefects on the verge of discovering his secrets, Veranix’s double life might just fall apart. Unless, of course, Fenmere puts an end to it first.

Veranix took a bite. It was good. Not perfect–too much mustard, not enough pepper–but it was quite good. Almost how his mother would make it.

Almost, but not quite right at all.

Quietly, he kept eating, every bite delicious. Every bite wrong. Every bite driving home the inevitable point that had never crossed his mind before.

He would never eat his mother’s Chickin Thalin again.