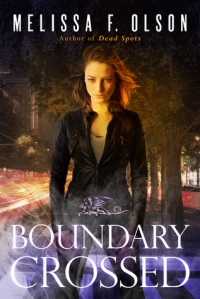 Boundary Crossed
by Melissa F. Olson
Series: Boundary Magic #1
Genre: Urban Fantasy
Published by 47 North, May 2015
E-book, purchased
302 pages
Grade: B+
Synopsis: After her twin sister’s brutal murder, former US Army Sergeant Allison “Lex” Luther vowed to protect her niece, Charlie. So when two vampires try to kidnap the baby, it quickly turns into a fight to the death—Lex’s death, that is.

She wakes up to two shocking discoveries: she has miraculously survived the fight, and baby Charlie is a “null,” gifted with the ability to weaken supernatural forces…and a target for creatures who want to control that power. Determined to guarantee her niece’s safety, Lex makes a deal with the local vampires. She sets out with the mysterious—and undead—“fixer” Quinn to track down whoever’s responsible for the kidnapping, sharpening her newfound magic skills along the way. But the closer she gets to the truth, the more dangerous her powers become.

I rolled my eyes and waited it out, silently pitying the cat burglar who thought he could get into my cabin unnoticed.

But instead of dying down, the tenor of the dogs’ cries changed from their usual ‘There may or may not be an animal in the yard!’ barks to their ‘This is not a drill!’ barks, finally transitioning into their ‘Code human! Code human!’ barks. I trudged toward the front door, but the doorbell rang before I reached the  entryway.

My dress had torn a little when I’d fallen, but I still felt like I was on the cover of a goddamned romance novel, getting carried around in my formal gown.