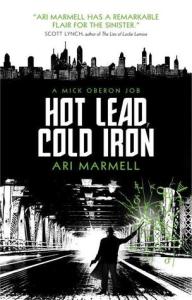 Oberon’s used to solving supernatural crimes, but the latest one’s extra weird. A mobster’s daughter was kidnapped sixteen years ago, replaced with a changeling, and Mick’s been hired to find the real child. The trail’s gone cold, but what there is leads Sideways, to the world of the Fae, where the Seelie Court rules. And Mick’s not really welcome in the Seelie Court any more. He’ll have to wade through Fae politics and mob power struggles to find the kidnapper – and of course it’s the last person he expected.

Now I’m a PI in a filthy, crime-ridden city, where I gotta talk like I’ve got a beef with grammar if I wanna halfway blend in, in a world that actually hurts me.

His peepers were zipping back and forth like pixies on caffeine….