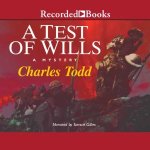 A Test of Wills
by Charles Todd
Narrated by Samuel Giles
Series: Inspector Ian Rutledge #1
Genre: Historical Mystery (Great Britain, 1919)
Published by Recorded Books, 2012 (originally published 1996)
Audiobook, purchased
305 pages
10 hours, 28 minutes
Grade: B+
Narrator Grade: B
Synopsis: Ian Rutledge returns to his career at Scotland Yard after years fighting in the First World War. Unknown to his colleagues he is still suffering from shell shock, and is burdened with the guilt of having had executed a young soldier on the battlefield for refusing to fight. A jealous colleague has learned of his secret and has managed to have Rutledge assigned to a difficult case which could spell disaster for Rutledge whatever the outcome. A retired officer has been murdered, and Rutledge goes to investigate.

“Tell me something. Why is everyone so determined to believe Wilton is innocent?”

Surprised, Davies said, “He’s a war hero isn’t he? Admired by the King and a friend of the Prince of Wales. He’s visited Sandringham, been received by Queen Mary herself! A man like that doesn’t go around killing people!”

With a wry downturn of his lips, Rutledge silently asked, “How did he win his medals, you fool, if not by being so very damned good at killing?”