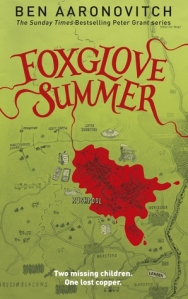 Foxglove Summer
by Ben Aaronovitch
Series: Peter Grant #5
Genre: Urban Fantasy
Published by DAW, 2015
E-book, purchased
377 pages
Grade: A-
Synopsis: In the fifth of his bestselling series Ben Aaronovitch takes Peter Grant out of whatever comfort zone he might have found and takes him out of London – to a small village in Herefordshire where the local police are reluctant to admit that there might be a supernatural element to the disappearance of some local children. But while you can take the London copper out of London you can’t take the London out of the copper.

Travelling west with Beverley Brook Peter soon finds himself caught up in a deep mystery and having to tackle local cops and local gods. And what’s more all the shops are closed by 4pm…

“There’s weird shit,” I said. “And we deal with the weird shit, but normally it turns out that there’s a perfectly rational explanation.” Which is often that a wizard did it.

During the whole pointless process not one resident refused to let us in or objected to us looking around, which I found creepy because there’s always one. But Dominic said no.

“Not in the countryside,” he said.

“Yeah,” he said. “That and everyone would know that they hadn’t cooperated, which people would find suspicious. In a village that sort of thing sticks for, like, generations.”