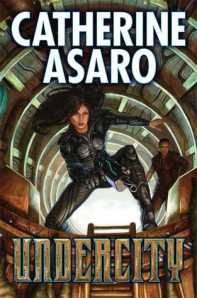 Undercity
by Catherine Asaro
Series: Major Baahjan #1
Genre: Science Fiction
Published by Baen
NetGalley e-ARC (Publication date is December 2, 2014)
–I received a review copy of this book from the Publisher in exchange for an honest review. The opinions stated here are entirely my own.
304 pages
Grade: B
Synopsis: Book one in a brand new series by Nebula and Hugo Award Winner Catherine Asaro set in the world of her Skolian Empire universe. In the galaxy-spanning future, Major Bhaajan is a tough female P.I. who works the dangerous streets of Undercity.

Major Bhaajan, a former military officer with Imperial Space Command, is now a hard-bitten P.I. with a load of baggage to deal with, and clients with woes sometimes personal, sometimes galaxy-shattering, and sometimes both. Bhaajan must sift through the shadows of dark and dangerous Undercity—the enormous capital of a vast star empire—to find answers.

I’m also reading more paper books these days. My library gets many of the books so I don’t have to wait for a lower price for the books! That has been great. I continue to look for e-books and audiobooks from my library, but they don’t have very many of them.

But the list I make each month helps me remember books and authors. The Goodreads links help me keep track of these books and I hope people reading my post may find some new books, too!

I love the cover! This sounds interesting–especially the time period.

Synopsis: A young woman investigates the murder of her mother in this absorbing historical mystery”
London, May, 1911. The new king, George V, is preparing for his coronation. The suffragettes are campaigning for women to get the vote. The East End seethes with unrest. And 18-year-old Kitty Challoner is looking forward to coming out in London society.

But Kitty s secure, sheltered world is about to be torn apart. Lydia Challoner is shot dead while out riding in Hyde Park, and during the ensuing murder investigation Kitty discovers that there was so much she didn’t know about her mother. Was Lydia really the killer s intended target? Is there a link to her Russian heritage? Why had she been behaving so strangely in recent weeks? Was she having an affair?

As Kitty determines to uncover the truth and wonders exactly whom she can trust, she learns that the household in which she lives harbours a number of dangerous secrets.

Synopsis: June 1890. Leeds is close to breaking point. The gas workers are on strike. Supplies are dangerously low. Factories and businesses are closing; the lamps are going unlit at night.

Detective Inspector Tom Harper has more urgent matters on his mind. The beat constable claims eight-year-old Martha Parkinson has disappeared. Her father insists she s visiting an aunt in Halifax but Harper doesn’t believe him. When Col. Parkinson is found dead the following morning, the case takes on an increasing desperation.

But then Harper s search for Martha is interrupted by the murder of a replacement gas worker, stabbed to death outside the Town Hall while surrounded by a hostile mob. Pushed to find a quick solution, Harper discovers that there s more to this killing than meets the eye and that there may be a connection to Martha’s disappearance.

I haven’t read anything by Ms. Asaro for several years, but I’ve liked many of her Skolian Empire books and this sounds intriguing. I also got a copy of this from the publisher at NetGalley!

Synopsis: BOOK ONE IN A BRAND NEW SERIES by Nebula and Hugo Award Winner Catherine Asaro set in the world of her Skolian Empire universe. In the galaxy-spanning future, Major Bhaajan is a tough female P.I. who works the dangerous streets of Undercity.

Major Bhaajan, a former military officer with Imperial Space Command, is now a hard-bitten P.I. with a load of baggage to deal with, and clients with woes sometimes personal, sometimes galaxy-shattering, and sometimes both. Bhaajan must sift through the shadows of dark and dangerous Undercity—the enormous capital of a vast star empire—to find answers.

This takes place on Mackinac Island! That’s what first drew my attention and it’s the beginning of a new series, too.

Geared for the Grave

Synopsis: Where biking takes a deadly turn. Shakedowns cover-ups and big fat lies keep bodies hidden on Mackinac Island and bike-riding tourists oblivious to it all.

To boost her chances for a promotion, Evie Bloomfield helps her boss’ dad with his cycle shop. The good idea turns bad when dad winds up prime suspect in a murder. To save her job Evie takes over the failing shop though she’s never ridden a bike, finding a killer though she can’t find her keys in her purse and discovering why someone is out to frame Dad. Can Chicago Evie survive life on Mackinac Island without her Honda, being on an eight-mile chunk of land with horses, carriages, bikes, fudge-eating tourists, the resident sage writing her eulogy and a killer who wants her dead?

This is a series I haven’t kept up with. I think I’ve read five or six books in the series and I enjoyed them so I’d like to start reading them again.

Synopsis: Ana Yartsin is on the verge of becoming a celebrity chef. Her custom Fabergé egg-shaped cakes have brought her national attention, as has the story behind the cakes: Her family owns the spectacular Fabergé Spring Egg snow globe, a magnificent example of the master craftsman’s work that includes five ruby-red tulips. As she prepares to be filmed for a reality TV show about the launch of her bakery in Rocky Point, New Hampshire, Ana hires antiques expert Josie Prescott to appraise the precious egg and snow globe.

The show’s pilot will show Ana planning the desserts for the upcoming wedding of her friend Heather to investment guru, Jason. When Josie arrives at Ana’s home, however, she finds Jason murdered and the priceless snow globe smashed beyond repair. All that remains for Josie to examine are bits and pieces—which to her shock reveal that the Spring Egg was a fake.

What has happened to the real Fabergé snow globe, if it even existed? And what does that have to do with Jason’s murder? Never one to resist a puzzle, Josie teams up with her reporter friend Wes to investigate.

I have the first book in this series as an Audible book and have listened to it. I enjoyed the narration and story so I’d like to continue and see how I like the next book or two.

Once Upon a Grind

Synopsis: Fairy tale fever has descended on New York City. Broadway fans are flocking to Red Riding Hood: The Musical; museums are exhibiting art inspired by the Brothers Grimm; and Clare Cosi gives her coffee truck a “Jack and the Beanstalk” makeover for a Central Park festival.

Clare’s coffee hunter ex-husband contributes a bag of African beans with alleged magical properties. His octogenarian mother entertains customers with readings of the grinds, but Clare remains skeptical—until she receives a vision that helps her find a young model’s body in the park’s woods.

The police dismiss “sleeping beauty” as the victim of a drug overdose. Then Clare uncovers evidence that points to a roster of suspects, from a wolf of Wall Street to a New York Giant and a wicked witch of the West Side.

Now Clare is really in the woods—with a dangerous predator on her heels and an investigation that leads from a secret Prince Charming club right back to her own NYPD detective boyfriend. If she doesn’t solve this mystery, those magic beans predict an unhappy ending.

I’m going to get the first book in this series. The series sounds very interesting!

Synopsis: Nothing ruins a romantic evening like a brawl with lowlifes—especially when one of them later turns up dead and my date, Detective Isabella Cherabino, is the #1 suspect. My history with the Atlanta PD on both sides of the law makes me an unreliable witness, so while Cherabino is suspended, I’m paying my bills by taking an FBI gig.

I’ve been hired to play telepathic bodyguard for Tommy, the ten-year-old son of a superior court judge in Savannah presiding over the murder trial of a mob-connected mogul. After an attempt on the kid’s life, the Feds believe he’s been targeted by the businessman’s “associates.”

Turns out, Tommy’s a nascent telepath, so I’m trying to help him get a handle on his Ability. But it doesn’t take a mind reader to see that there’s something going on with this kid’s parents that’s stressing him out more than a death threat…

This sounds like it might be a good book. I’m not sure what’s happening in the cover of the book though!??

Synopsis: Game of Thrones meets the Grimm’s fairy tales in this twisted, fast-paced romantic fantasy-adventure about Sleeping Beauty’s daughter, a warrior princess who must fight to reclaim her throne.

Though she looks like a mere mortal, Princess Aurora is a fairy blessed with enhanced strength, bravery, and mercy yet cursed to destroy the free will of any male who kisses her. Disguised as a boy, she enlists the help of the handsome but also cursed Prince Niklaas to fight legions of evil and free her brother from the ogre queen who stole Aurora’s throne ten years ago.

Will Aurora triumph over evil and reach her brother before it’s too late? Can Aurora and Niklaas break the curses that will otherwise forever keep them from finding their one true love?

The books I hope to get and read this month:

What books are planning to get this month?