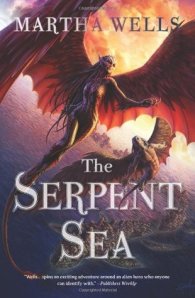 The Serpent Sea
by Martha Wells
Series: The Books of Raksura #2
Genre: Fantasy
Published by Night Shade Books, 2012
Library book
340 pages
Grade: A
Synopsis: Moon, once a solitary wanderer, has become consort to Jade, sister queen of the Indigo Cloud court. Together, they travel with their people on a pair of flying ships in hopes of finding a new home for their colony. Moon finally feels like he’s found a tribe where he belongs.

But when the travelers reach the ancestral home of Indigo Cloud, shrouded within the trunk of a mountain-sized tree, they discover a blight infecting its core. Nearby they find the remains of the invaders who may be responsible, as well as evidence of a devastating theft. This discovery sends Moon and the hunters of Indigo Cloud on a quest for the heartstone of the tree — a quest that will lead them far away, across the Serpent Sea.

He had a great deal of experience trying to fit into various groundling tribes and settlements, just in search of a place to live. But trying to fit into a group where he actually belonged, and had an important role, was . . . still daunting. He nursed a lingering fear that he was somehow going to wreck it and got thrown out of the court. It wasn’t that odd a notion: he had gotten thrown out of a lot of places for various reasons.

On the platform, a golden-skinned groundling woman, dressed only in wispy scarves, moved to the music, though she looked half asleep. Dancing was another groundling thing that left Moon cold. The quick movements were often distracting and made him twitchy with the urge to hunt, and the slow movements were just boring. It was more fun to watch grasseaters graze.