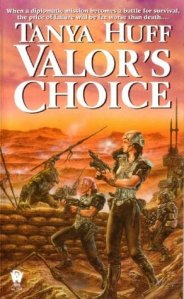 Valor’s Choice
by Tanya Huff
Narrated by Marguerite Gavin
Series: Confederation series #1
Genre: Military Science Fiction (space opera)
Audiobook Published by Tantor Audio, 2009 (originally published by DAW, 2000)
Audiobook, purchased
416 pages
9 hours, 39 minutes
Grade: A
Narrator Grade: A-
Synopsis: In the distant future, humans and several other races have been granted membership in the Confederation — at a price. They must act as soldier/protectors of the far more civilized races who have long since turned away from war….

When the Confederation first started integrating the di’Taykan and the Krai into what was predominantly a human military system, xenopsychologists among the elder races expected a number of problems. For the most part, those expectations fell short. After having dealt with the Mictok and the H’san, none of the younger races – all bipedal mammals – had any difficulty with each other’s appearance. Cultural differences were absorbed into the prevailing military culture and the remaining problems were dealt with in the age-old military tradition of learning to say “up yours” in the other races’ languages. The “us against them” mentality of war made for strange bedfellows.

“First of all, I work for a living.” … Then she turned on her heel and walked toward the hatch. “SSgt Kerr?” One hand on the hatch release, she paused. “You said there were two reasons? What was the second?”

“The second reason, Sir? My parents were married.”