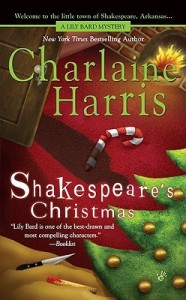 Shakespeare’s Christmas
by Charlaine Harris
Series: Lily Bard #3
Genre: Mystery
Published originally by Minotaur, 1998
e-book, Library
260 pages
Grade: B+
Synopsis: Lily heads to her hometown of Bartley for her estranged sister’s Christmas Eve wedding. But there is something in the air besides holiday cheer—there’s murder. And Lily must work fast to clean up the messy case before her sister promises to love, honor, and obey a killer.

The town’s seasonal centerpiece (since the manger scene had to be removed) was a huge Christmas tree on the courthouse lawn; the churches sponsored a big public party to decorate it. In consequence, it looked very homey rather than elegant–typical of Shakespeare, come to think of it.

A matching door, the one that had been labeled “Blacks Only” at the beginning of Dr. LeMay’s practice, had been replaced by a picture window. In the past five years, a set of bars had been installed across the vulnerable glass. Kind of wrapped up Bartley’s history in a nutshell, I decided.

Check next week and see how I’m managing!