But the list I make each month helps me not forget books. The Goodreads links help me keep track of these books and I hope people reading my post may find some new books, too!

I read the first book in this series and really liked it so I’m excited to find out Steven Brust is still writing this series thirty years later!

Synopsis: Years ago, Vlad Taltos came to make his way as a human amidst the impossibly tall, fantastically long-lived natives of the Dragaeran Empire. He joined the Jhereg, the Dragaeran House (of which there are seventeen) that handles the Empire’s vices: gambling, rackets, organized crime. He became a professional assassin. He was good at it.

But that was then, before Vlad and the Jhereg became mortal enemies.

For years, Vlad has run from one end of the Empire to the other, avoiding the Jhereg assassins who pursue him. Now, finally, he’s back in the imperial capital where his family and friends are. He means to stay there this time. Whatever happens. And whatever it takes.

When I first saw this title I wasn’t quite sure what kind of book this was…LOL. But when I read the synopsis and found out it was about a jinni…well, I am in!

Synopsis: Nalia is a jinni of tremendous ancient power, the only survivor of a coup that killed nearly everyone she loved. Stuffed into a bottle and sold by a slave trader, she’s now in hiding on the dark caravan, the lucrative jinni slave trade between Arjinna and Earth, where jinn are forced to grant wishes and obey their human masters’ every command. She’d give almost anything to be free of the golden shackles that bind her to Malek, her handsome, cruel master, and his lavish Hollywood lifestyle.

Enter Raif, the enigmatic leader of Arjinna’s revolution and Nalia’s sworn enemy. He promises to free Nalia from her master so that she can return to her ravaged homeland and free her imprisoned brother—all for an unbearably high price. Nalia’s not sure she can trust him, but Raif’s her only hope of escape. With her enemies on the hunt, Earth has become more perilous than ever for Nalia. There’s just one catch: for Raif’s unbinding magic to work, Nalia must gain possession of her bottle…and convince the dangerously persuasive Malek that she truly loves him. Battling a dark past and harboring a terrible secret, Nalia soon realizes her freedom may come at a price too terrible to pay: but how far is she willing to go for it?

Inspired by Arabian Nights, EXQUISITE CAPTIVE brings to life a deliciously seductive world where a wish can be a curse and shadows are sometimes safer than the light.

This is one of my husband’s favorite series…and I think I will buy this book for him for Christmas. He doesn’t read my blog very often so I don’t think he will see this–I hope. 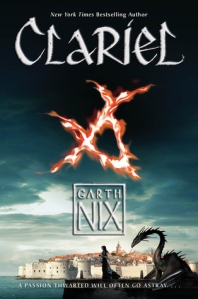 Synopsis: Sixteen-year-old Clariel is not adjusting well to her new life in the city of Belisaere, the capital of the Old Kingdom. She misses roaming freely within the forests of Estwael, and she feels trapped within the stone city walls. And in Belisaere she is forced to follow the plans, plots and demands of everyone, from her parents to her maid, to the sinister Guildmaster Kilip. Clariel can see her freedom slipping away. It seems too that the city itself is descending into chaos, as the ancient rules binding Abhorsen, King and Clayr appear to be disintegrating.

With the discovery of a dangerous Free Magic creature loose in the city, Clariel is given the chance both to prove her worth and make her escape. But events spin rapidly out of control. Clariel finds herself more trapped than ever, until help comes from an unlikely source. But the help comes at a terrible cost. Clariel must question the motivations and secret hearts of everyone around her – and it is herself she must question most of all.

Synopsis: Sixteen years ago the Kingdom of Winter was conquered and its citizens enslaved, leaving them without magic or a monarch. Now, the Winterians’ only hope for freedom is the eight survivors who managed to escape, and who have been waiting for the opportunity to steal back Winter’s magic and rebuild the kingdom ever since.

Orphaned as an infant during Winter’s defeat, Meira has lived her whole life as a refugee, raised by the Winterians’ general, Sir. Training to be a warrior—and desperately in love with her best friend, and future king, Mather — she would do anything to help her kingdom rise to power again.

So when scouts discover the location of the ancient locket that can restore Winter’s magic, Meira decides to go after it herself. Finally, she’s scaling towers, fighting enemy soldiers, and serving her kingdom just as she’s always dreamed she would. But the mission doesn’t go as planned, and Meira soon finds herself thrust into a world of evil magic and dangerous politics – and ultimately comes to realize that her destiny is not, never has been, her own.

Ilona Andrews is a favorite author of mine. I’m really looking forward to this book.

Synopsis: Nevada Baylor is faced with the most challenging case of her detective career—a suicide mission to bring in a suspect in a volatile case. Nevada isn’t sure she has the chops. Her quarry is a Prime, the highest rank of magic user, who can set anyone and anything on fire.

Then she’s kidnapped by Connor “Mad” Rogan—a darkly tempting billionaire with equally devastating powers. Torn between wanting to run or surrender to their overwhelming attraction, Nevada must join forces with Rogan to stay alive.

Rogan’s after the same target, so he needs Nevada. But she’s getting under his skin, making him care about someone other than himself for a change. And, as Rogan has learned, love can be as perilous as death, especially in the magic world.

Mary Balogh is another author who is one of my favorites.  I’m very happy to have another book in this series only four months after book 3.

Synopsis: Flavian, Viscount Ponsonby, was devastated by his fiancée’s desertion after his return home. Now the woman who broke his heart is back—and everyone is eager to revive their engagement. Except Flavian, who, in a panic, runs straight into the arms of a most sensible yet enchanting young woman.

Agnes Keeping has never been in love—and never wishes to be. But then she meets the charismatic Flavian, and suddenly Agnes falls so foolishly and so deeply that she agrees to his impetuous proposal of marriage.

When Agnes discovers that the proposal is only to avenge his former love, she’s determined to flee. But Flavian has no intention of letting his new bride go, especially now that he too has fallen so passionately and so unexpectedly in love.

I’ve read several books by Ms. Kagawa and liked most of them. This sounds like it will be a good new series. I almost always like books with dragons in them!

Synopsis: Long ago, dragons were hunted to near extinction by the Order of St. George, a legendary society of dragon slayers. Hiding in human form and growing their numbers in secret, the dragons of Talon have become strong and cunning, and they’re positioned to take over the world with humans none the wiser.

Ember and Dante Hill are the only sister and brother known to dragonkind. Trained to infiltrate society, Ember wants to live the teen experience and enjoy a summer of freedom before taking her destined place in Talon. But destiny is a matter of perspective, and a rogue dragon will soon challenge everything Ember has been taught. As Ember struggles to accept her future, she and her brother are hunted by the Order of St. George.

Soldier Garret Xavier Sebastian has a mission to seek and destroy all dragons, and Talon’s newest recruits in particular. But he cannot kill unless he is certain he has found his prey: and nothing is certain about Ember Hill. Faced with Ember’s bravery, confidence and all-too-human desires, Garret begins to question everything that the Order has ingrained in him: and what he might be willing to give up to find the truth about dragons.

I haven’t read anything by Patrick Rothfuss yet, but have several of his books. This sounds like it will be good.

The Slow Regard of Silent Things

Synopsis: Deep below the University, there is a dark place. Few people know of it: a broken web of ancient passageways and abandoned rooms. A young woman lives there, tucked among the sprawling tunnels of the Underthing, snug in the heart of this forgotten place.

Her name is Auri, and she is full of mysteries.

The Slow Regard of Silent Things is a brief, bittersweet glimpse of Auri’s life, a small adventure all her own. At once joyous and haunting, this story offers a chance to see the world through Auri’s eyes. And it gives the reader a chance to learn things that only Auri knows….

In this book, Patrick Rothfuss brings us into the world of one of The Kingkiller Chronicle’s most enigmatic characters. Full of secrets and mysteries, The Slow Regard of Silent Things is the story of a broken girl trying to live in a broken world. 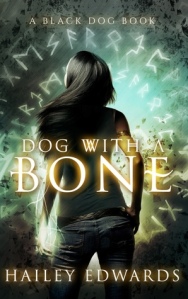 Dog with a Bone

Synopsis: Half-bloods with Thierry’s skill set are given two options. They can join the conclave’s marshal program, or they can pack their bags. Turn down the job offer, and you’ve just shredded your residency pass for the mortal realm and booked yourself a one-way ticket to Faerie.

Texas is the only home Thierry has ever known, and she’s not going anywhere. Even if it means following in her notorious father’s footsteps as a peacekeeper. But pinning on the badge opens her eyes to the fact sometimes fae need protection too, and that sometimes humans are the real monsters.

The books I plan to actually buy! (I’m waiting for the others to come down in price)

What new books do you plan to buy (and read) in October?