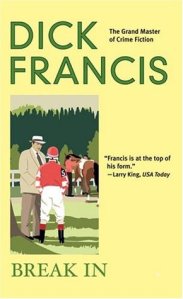 Break In
by Dick Francis
Narrated by Simon Prebble
Series: Kit Fielding #1
Genre: Mystery
Published by Berkeley, 2005 (originally published 1986)
Audiobook, Purchased
320 pages
Length: 9 hours, 14 minutes
Grade: A-
Narrator Grade: B+
Synopsis: Steeplechase jockey Christmas “Kit” Fielding has had more than his share of close calls both on and off the course. But trouble hits close to home when a grudge between his family and his sister’s in-laws turns into a blood feud.

(I don’t have any quotes since I listened to the audiobook and wasn’t thinking about quotes as I listened.)

Have you read this book or others by Dick Francis? How did you like it or the book you read by him?