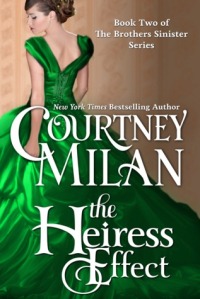 The Heiress Effect
by Courtney Milan
Series: Brothers Sinister, Book 2
Genre: Historical Romance–1867 England
Published by Courtney Milan, 2013
E-book, Purchased
280 pages
Grade: B+
Synopsis: Miss Jane Fairfield can’t do anything right. When she’s in company, she always says the wrong thing—and rather too much of it. No matter how costly they are, her gowns fall on the unfortunate side of fashion. Even her immense dowry can’t save her from being an object of derision.

And that’s precisely what she wants. She’ll do anything, even risk humiliation, if it means she can stay unmarried and keep her sister safe.

Mr. Oliver Marshall has to do everything right. He’s the bastard son of a duke, raised in humble circumstances—and he intends to give voice and power to the common people. If he makes one false step, he’ll never get the chance to accomplish anything. He doesn’t need to come to the rescue of the wrong woman. He certainly doesn’t need to fall in love with her. But there’s something about the lovely, courageous Jane that he can’t resist…even though it could mean the ruin of them both.

“I worry about you,” he finally said to Free. “I’m afraid that you’re going to break your heart, going up against the world.”

“No.” The wind caught her hair and sent it swirling behind her. “I’m going to break the world.”

“Is it a thorny question of ethics? Or is it the sort of ethical question where the right choice is easy, but the unethical answer is too tempting?”

“And nothing says lace like…more lace.”