So yesterday I wrote a little bit about my love for A Tale of Two Cities by Charles Dickens. I feel like I said almost nothing about the book and there’s more I wanted to write about, so this is post 2. This post is mostly about Dickens writing about the French Revolution. I don’t think it really counts as a spoiler for me to say that once the French Revolution portion of the story gets going, the French peasants are going to kill a lot of people and they’re going to do it some really awful ways. That’s just history. I’ll al 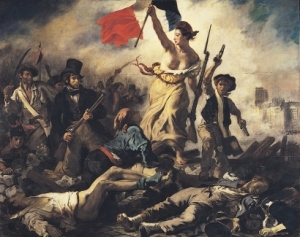 so say that once they start doing that stuff, it becomes really difficult not to view them as an extremely unlikable bunch of people, but this is where Dickens is really amazing. He’s spent the earlier part of the book painting such a brutally moving picture of the life of the poor in pre-revolution France that you can totally understand why they end up murdering all these people later in the book. Here’s an example where he’s speaking of the French peasants:

“A people that had undergone a terrible grinding and re-grinding in the mill. . . The mill which had worked them down, was the mill that grinds young people old; the children had ancient faces and grave voices; and upon them, and upon the grown faces, and ploughed into every furrow of age and coming up afresh, was the sign, Hunger. It was prevalent everywhere.”

One of my favorite passages from the book is a description of the frenzy of a crowd of peasants in Paris to collect and drink every drop of wine from a dropped and broken wine cask. They scoop it off the muddy ground, they soak their scarves in it and wring the wine into their mouths, they chew on the broken pieces of the wine cask to suck out all the wine they can. This scene manages to be funny while highlighting the extreme poverty of French peasants before the revolution. It also foreshadows the blood that will eventually stain the streets and people of this neighborhood once the revolution begins.

“A shrill sound of laughter and of amused voices–voices of men, women, and children–resounded in the street while this wine game lasted. . . The wine was red wine, and had stained the ground of the narrow street in the suburb of Saint Antoine, in Paris, where it was spilled. It had stained many hands, too, and many faces, and many naked feet, and many wooden shoes […] One tall joker. . . scrawled upon a wall with his finger dipped in muddy wine—BLOOD. The time was to come, when that wine too would be spilled on the street-stones, and when the stain of it would be red upon many there.”

This book manages to make you feel for both the peasants and the aristocrats, even though in the beginning of the story you despise the aristocrat

s and by the end you are repulsed by the peasants. It really left me with an intense feeling of the general awfulness of this kind of conflict. Given the horrible way the peasants are treated, I really can’t say they shouldn’t have had their revolution. But then reading about the terrible things that happen to the aristocrats, even if you agree that they deserved to be overthrown, it still made me cry to read about them being sent by the hundreds and thousands to La Guillotine:

“It sheared off heads so many, that it, and the ground it most polluted, were a rotten red. It hushed the eloquent, struck down the powerful, abolished the beautiful and good. Twenty-two friends of high public mark. . . it had lopped the heads off, in one morning, in as many minutes.”

I was going to end this post by talking about the ways in which the tragic costs of revolution seen in A Tale of Two Cities really made me think about the current situation in Syria, but that’s probably a bit heavier than my mom really wants me to get on her blog. And at the end of the day, it’s not really the point of the book. I think it’s more important to say that even though the Revolution is the backdrop for a large part of this book, A Tale of Two Cities is really mostly about love. The love of a father and daughter, of a husband and wife, and of a man who loves a woman he knows he can never have, but who loves her enough to want nothing but happiness for her. I haven’t done the book justice in these two short reviews, but hopefully some of you will still want to read it anyway!

One thought on ““Liberty, Equality, Fraternity, or Death!””