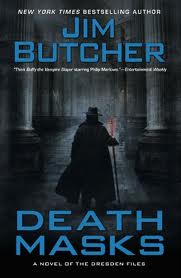 Death Masks
by Jim Butcher
Series: Dresden Files, book 5
Genre: Urban Fantasy
Published by: Roc
E-book, from library
373 pages
Grade: A-
Synopsis: Harry Dresden, Chicago’s only practicing professional wizard, should be happy that business is pretty good for a change. But now he’s getting more than he bargained for.

A duel with the Red Court of Vampires’ champion, who must kill Harry to end the war between vampires and wizards…

The missing Shroud of Turin…

A handless and headless corpse the Chicago police need identified…

Not to mention the return of Harry’s ex-girlfriend Susan, who’s still struggling with her semivampiric nature. And who seems to have a new man in her life.

Some days, it just doesn’t pay to get out of bed. No matter how much you’re charging.

This is the second book I’ve read in this series and I need to go back and start at the beginning, I think! Even though I haven’t read those first books I don’t feel lost and I’m really enjoying this series. They are so much fun to read. Lots of action, lots of Harry Dresden style humor and heroic deeds–what more could I want?

Harry is very busy in this book. The war between the White Council and the Red Court (which Harry started) is still going on and the Red Court is still trying to kill him. He’s challenged to a duel by a Red Court vampire, his ex-girlfriend Susan shows up in Chicago, he’s hired to find the Shroud of Turin which has been stolen in Italy and brought to Chicago. There’s lots of action happening in all these events and Harry needs to use his magical prowess as well as his intelligence to figure out what’s going on and how to stay alive.

As one of the characters comments in this book Harry has to deal with many shades of gray. He has done things in the past which caused him problems then and now. He made mistakes before he realized what he was doing and he is open to temptations, but he deals with his shades of gray by acting as honorably as he can and trying to keep his friends safe. This is his biggest strength and his biggest weakness–his friends. He fights the duel with the vampire because his friends are threatened. But his friends also keep him grounded and fight with him when he needs them.

I enjoyed this book. The characters in these books aren’t always safe and people die and people have to change sometimes and move on. I like that the characters grow and change. There is also a large cast of people who come and go in these books sometimes having more of a role in one book or another. Jim Butcher does a good job describing them and making them interesting. They grow and change with the series.

I’m looking forward to reading more books in this series!